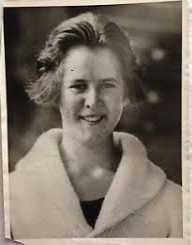 Gertrude Ederle was born on October 23rd, in 1905. She was an American swimmer who managed to break the world swimming record in five events. Later in her career, Ederle swam across the English Channel thereby becoming the first woman to achieve such a feat.

Gertrude Ederle was born on October 23rd, in 1905. Her place of birth was in Manhattan, New York City. She was the third born daughter to Henry Ederle and Anna Haberstroh. Growing up, her father trained her how to swim as they had a summer cottage of their own.

Gertrude Ederle competed in the 1924 Summer Olympics which were held in Paris. She emerged victorious earning herself a gold medal. In addition to this, she also marked a new world record standing at 4:58.8.

The following year, in 1925, Ederle moved from her amateur career and began to compete in the professional field. Still, in 1925, Gertrude Ederle set a new record of 7hrs 11 minutes after swimming from Battery Park to Sandy Hook. This record was however broken after 81 years by Tammy van Wisse.

After that, Ederle moved to France where she partnered with Jabez Wolffe to train together. However, their partnership proved futile as Wolffe slowed down Ederle. After this, Ederle made her first attempt to swim across the Channel in August 1925.

Gertrude Ederle failed in her first attempt. Nevertheless, she tried swimming again in 1925 and completed after 14hrs 34 minutes. This record stood for 25 years before being brought down by Florence Chadwick who swam in 13hrs 20 minutes.

Gertrude Ederle breathed last on November 30th, in 2003. She was 98 years old at the time of her demise.