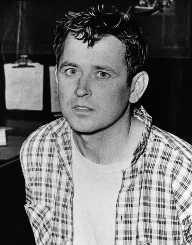 James Earl Ray was born on March 10, 1928, in Alton, Illinois, USA. His parents were Lucille and George Ray. He also had eight siblings. George Ray was also a criminal (he was charged with forgery charges). For some of his teenage years, Ray moved out of his parents’ home to live with his grandmother.

Near the end of World War II, James E. Ray dropped out of school to join the United States military, in 1945. He was stationed in West Germany. He would go on to stay in the army after the end of the war until 1948. He was later discharged from the army for ignoring the military rules and often being drunk while working.

James E. Ray’s criminal activities began after he returned to the United States (soon after his discharge from the military). Ray’s first arrest was in 1949. James E. Ray had tried to rob a cafe in Los Angeles, California. He was arrested for this crime and sentenced to serve three months in prison.

After his 1959 arrest, James E. Ray was sent to serve out his jail time at the Missouri State Penitentiary. He served almost half of his time before he escaped the prison in 1967. After this, he tried to leave the United States to flee to Canada, but he failed. He instead moved around the United States, never settling in any place for long.

It is suspected that it was in 1968 that James E. Ray began planning the assassination of Martin Luther King Jr. (MLK). No one knows the exact details of his initial plan, or why he decided to kill MLK, as he never admitted his true reasoning against the crime. It is especially strange that he would jump from crimes like breaking and entering and robbery to murder.

Regardless of Ray’s motivation, historians are clear on what happened on the day of MLK’s assassination. James E. Ray rented a hotel room in Memphis, Tennessee. Near his hotel was the Lorraine Motel, where Ray knew MLK was staying. From his hotel room, James E. Ray watched out the window, with a gun in hand, waiting for MLK to appear. Eventually, MLK went out on his balcony to relax. That’s when Ray took his shot, killing MLK, on April 4, 1968.

After shooting, James E. Ray fled the crime scene. The FBI soon became involved with the case. However, James E. Ray was tricky and hard to find. The FBI and other crime-stopping groups looked all around the United States, as well as in other countries all over the world, trying to find Ray. It wasn’t until July 19, 1968, that the FBI found Ray in London, England, and sent him back to the United States to be put on trial.

After being charged with the murder of MLK, James E. Ray pleaded guilty and was sentenced to 99 years in prison. He would later try to suggest that he did not kill MLK, or at least, James E. Ray hinted that he did not act alone. He mentioned that the government might have helped to plan the assassination.

In 1977, James E. Ray escaped from prison for a short while. When he was captured and put back in prison, his sentence was extended to 100 years.

James E. Ray died on April 23, 1998, in prison, Nashville, Tennessee, USA. His cause of death was kidney failure. He was 70 years old when he passed away.