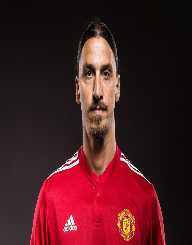 Born on October 3, 1981, Zlatan Ibrahimovic is a talented Swedish professional player who has played for almost all the top clubs in the world. The current Manchester United forward epitomizes the adage, “the older, the better” as he continues to score mercilessly at age 35. Ibrahimovic, who started his professional football career with Malmo FF in the late 1990s has since played for clubs like Ajax, Juventus, Inter Milan, Barcelona, Paris Saint-Germain and currently Manchester United. Ibrahimovic made an international debut for Sweden in 2001, grow through the ranks to captain the national team and is currently the topmost player in that country.

Zlatan Ibrahimovic is also the leading goal scorer for the country has scored 62 international goals. Being one of the prolific strikers in the world, the good old Zlatan has become the leading goal scorer of almost all the clubs he has played and currently one of the most decorated players in the world. He has won 32 trophies throughout his career. He is known for his strength, creativity, the ability to strike at the right time, and in his power during airplay. He has also played in all the top international football events including the FIFA World Cup and the UEFA Champions League.

Zlatan Ibrahimovic was born on October 3, 1981, to Sefik Ibrahimovic and Jurka Gravic. His father is a Bosnian immigrant to Sweden and his mother a Croatian immigrant. Ibrahimovic displayed his football prowess at age six having received his first football age.

At the young age, he played for local football clubs including Malmo BI and FBK Balkan. Ibrahimovic grew with strength and power becoming a regular player for his local club Malmo FF. At a time, frustration almost set in as he decided to quit his football career for a dock work when he was age 15. It took the intervention of his then manager to convince him not to stay put and continue with the game.

Zlatan Ibrahimovic first professional contract was signed in 1996 with Malmo playing in the junior team. He made a debut in the AllsvenskanSweden's top-flight league in the 1999 season when he moved to the senior team. Malmo FF was however relegated to the second division at the end of that season. They would fight hard to return the next season.

While there, Arsene Wenger of Arsenal invited him for a trial, but Ibrahimovic rejected. Ajax then came forward, and on March 22, 2001, a €8.7 million transfer deal was reached between Ajax and Malmo FF.

After moving to Ajax, Zlatan Ibrahimovic had less playing time under the then manager Co Adriaanse until he was replaced by coach Ronald Koeman. Koeman named him among his first team, and it was during this time that his full potentials were realized.

Zlatan Ibrahimovic played in the team’s champions league campaign scoring five goals before the team was eliminated in the quarter-finals by Milan. In the 2004 season which was his last season with the club, his goal against NAC on August 29, 2004, was voted by Eurosport viewers as the Goal of the Year. He left for Juventus after that season.

After the end of the 2004 season, Zlatan Ibrahimovic left Ajax to join Juventus on a €16 million deal. He scored sixteen goals in his first season with Juventus. His performance increased by each match much during that season propelling him to win the Guldbollen award meant for best Swedish footballer of the year. His performance, however, dropped the following season and fell out of love of love with the fans.

He eventually moved from the club when Juventus was relegated to the Serie B during the Calciopoli scandal after the 2005-2006 season.

Ibrahimovic has since played for clubs like Internazionale after signing a €24.8 million,four-year contract in 2006 to play in the Serie A. He became the top scorer with 25 goals during the 2008-2009 season. He made a move from Inter to Barcelona in a swap deal, including Samuel Eto’o and a €46 million transfer fee. He signed a four-year contract with Barcelona with a €250 million release clause.

Ibrahimovic fell out of love with coach Pep Guardiola and left Barca after the 2009 season on loan to Milan. Ibrahimovic then joined Milan for the 2010-2011 season on loan and subsequently signed a four-year contract with the club. Ibrahimovic signed a contract with Paris Saint-Germain on July 17, 2012, on a combined transfer deal of €180 million, making him the most expensive player at the time. He had an impressive play with the team winning several league trophies with the club.

Zlatan Ibrahimovic currently plays for Manchester United after his move from Paris Saint-Germain on a free transfer deal. He joined the team in July 2016 choosing the number 9 jersey and is on a £200,000 wage per week. He made his England debut in the 2016 FA Community Shield scoring against Leicester City in Manchester United’s 2-1 victory.

He league match debut was against Bournemouth where he also scored his debut Premiership goal in the clubs 3-1 win. His first hat-trick for the club was in a Europa League Round of 32against Saint-Etienne on February 5, 2017. As at February 5, 2017, he has scored 15 Premiership league games and 20 in all competitions. Ibrahimovic has made a record by becoming the oldest player in the league to score 15 goals in a single season.

Ibrahimovic chose to play for Sweden despite the options of playing for Croatia or Bosnia and Herzegovina. His international debut was in the 2000-01 Nordic Football Championship game against the Faroe Islands on January 31, 2001. However, he first competitive game was in the 2002 World Cup qualifier against Azerbaijan on October 7, 2001, where he scored his maiden international goal in their 3-0 win.

His first World Cup appearance was when Japan and Korea hosted the tournament in 2002. Ibrahimovic scored three goals in the qualification matches to the UEFA Euro 2004. He scored two goals during the tournament proper, and his back heel goal against Italy was chosen as the best goal of the tournament. He has since played in the 2006 World Cup, Euro, 2008, 2012 and 2016.

Ibrahimovic announced his retirement from international games after Sweden’s last match in the Euro 2016 on June 21, 2016. He scored 62 goals during his international campaigns.

Zlatan Ibrahimovic his two kids with his longtime partner Helena Seger. His kids are Maximilian and Vincent. He holds his religious beliefs in high esteem and is free from alcohol intake. During his time with Malmo, he took taekwondo lessons at the Malmo Taekwondo club Enighetand received an honorary black belt. His football career has also been characterized by some form of violent posture toward his teammates.

Among team is when Rafael van der Vaart accused him of deliberately injuring him during an international friendly match between Netherlands and Sweden in 2004. He was involved in a fight with his Milan teammate Oguchi Onyewu, after initially making a two-footed tackle on him. Ibrahimovic suffered a rib injury during the fight.

Zlatan Ibrahimovic has won trophies in every club he played and has made some impressive records in his career. He has won the Swedish Football Personality of the year, 11 times Guldbollen Awards, Golden Boot, top scorer awards, player of the year awards, FIFA Puskas Award, 2013 and several other awards.