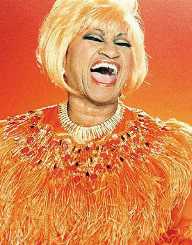 Cuban-American singer Celia Cruz, extremely popular and influential figure in the history of 20th century Cuban and Latin American music, was born as Úrsula Hilaria Celia Caridad Cruz Alfonso on October 21, 1925, in Havana, Cuba. She was the second of the four children of her parents Simon Cruz, a railroad stocker and Catalina Alfonso, a housewife. Celia Cruz was raised in the poor, working-class neighborhood of Santos Suárez in Havana, Cuba, in an extended family of 14 children. She was one of the eldest members of these 14 brothers and sisters comprising of her own 3 siblings and many cousins. It was one of her ritualistic duty to put the younger children to bed by singing them to sleep during her childhood days.

While she was studying for her high school graduation the prevailing diverse cultural and musical environment of Cuba had a great and growing influence upon her. The stalwarts of Cuban and Latin American music during the 1930s such as Abelardo Barroso, Arsenio Rodríguez, Pablo Quevedo and Fernando Collazo had impacted her budding musical career to a significant extent. Though her father was not in favor of her pursuing a music career and instead wanted her to study more and pursue a career in teaching, she took lessons to learn Santeria songs from her neighbor during her childhood days. She also started singing in school programs and community gatherings.

During the 1940s, Cruz happened to win a singing contest called "La hora del té" ("Tea Time") organized by Havana's radio station Radio García-Serra, where she came first by singing the tango song ‘Nostalgia’ which further motivated her to follow the passion she felt regarding pursuing a music career. She started frequenting the nightclubs and cabarets of her neighborhood accompanied by her aunt and began giving singing performances during her teenage days. However, she enrolled herself at the Normal School for Teachers in Havana with the intention of becoming a literature teacher after her father’s persistent encouragement to opt for a respectable career being a devout practicing Catholic.

With the passage of time, Cruz, with some feedback from her teachers started to realize the huge earning potential of a prosperous singer and began studying music theory, voice, and piano at Havana's National Conservatory of Music from 1947 onwards.

As her live and radio programs were gaining in number amid growing accolades all around, Celia Cruz abandoned her study and fully concentrated on her blooming music career. She made her first recording in Venezuela in 1948 after having won a number of singing contests organized by different radio stations. Her big break to stardom began in 1950 when she was chosen to replace the departing lead singer Myrta Silva of the distinguished Cuban orchestra Sonora Matancera. Amid growing apprehension of her capability to replace the departing Puerto Rican lead singer of the popular band, Cruz showed her true potential by successfully catapulting the band to a new and greater height and winning the confidence and support of Sonora’s band leader Rogelio Martinez in the process. The band went on to an extensive tour of Central and South America throughout the 1950s with Cruz as their lead singer making the audience dance to her rendition of excellent salsa music.

When Fidel Castro, the chief of the communist revolutionaries of Cuba, assumed control of the country in 1959 after a prolonged revolution, Cruz along with many other members of her band was touring Mexico. With their own country witnessing a political turmoil, the members of the band Sonora Matancera including Cruz herself decided to cross over to the United States for permanent settlement. She was granted the U.S. citizenship in 1961 and began residing in the New York City. An enraged Fidel Castro banned her and her husband Pedro Knight from returning to Cuba.

In 1965, Cruz eventually left the band Sonora Matancera with the intention of starting a solo music career. She began her association with American musician, songwriter and record producer Tito Puente and produced eight albums in collaboration with the latter. However, the albums failed to achieve the expected success. They together joined the Vaya Records label shortly afterward. She had a successful concert at New York's Carnegie Hall in collaboration with accomplished pianist Larry Harlow immediately upon joining the label.

In 1974, one of her most successful albums Cruz was released which was recorded in collaboration with Johnny Pacheco, a celebrated musician of Dominican origin and one of the most influential figures of Latin American music. One of her signature song ‘Quimbara’ came from this album. Cruz soon became a member of a salsa musicians group called Fania All-Stars owned by Fania label. With Fania All-Stars, Celia went on a tour of France, England, The Democratic Republic of Congo (formerly Zaire) and again Latin America. A film on music called ‘Soul Power’ featured her performance in Zaire during the tour.

Cruz appeared in a documentary film called ‘Salsa’ depicting the Latin culture in 1976 along with Mexican actress Dolores Del Río and Nuyorican salsa musician and social activist Willie Colón, with whom she also made three albums in 1977, 1981 and 1987. The improvised rhymed lyrics contributed a unique style to salsa and her easy movement between the high and low pitches contradicting her age was a real asset of these three albums.

Celia Cruz was one of the most accomplished and popular salsa performers of all time. She had the distinction of recording 23 gold albums during her illustrious career. In 1994, she was awarded The National Medal of Arts by the then U.S. President Bill Clinton.

Cruz won a total of eight Grammy Awards which includes the Latin Grammy Awards. All these awards were bestowed upon her during her lifetime and also posthumously. She was admitted into the International Latin Music Hall of Fame during the year 1999.