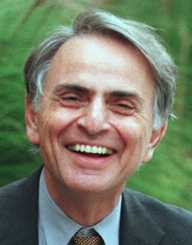 Carl Edward Sagan was born on November 9, 1934, in Brooklyn, New York. His father was an immigrant garment worker from the Russian Empire, and his mother was from New York. Sagan also had a sister. The family lived in poor conditions but was very close. Sagan has attributed his achievements to both of his parents, for inspiring his sense of wonder and encouraging him to succeed.

One of the most significant turning points in Sagan’s life was when his parents took him to the 1939 New York World’s Fair. He was only four years old at the time, but the exhibition certainly made an impression on his life. After entering elementary school, Sagan began to show interest in nature. He often went to the public library to learn about the stars. He continued to grow interested after visiting the American Museum of Natural History. His parents supported his interest and bought him chemistry sets and different reading materials. Space was the primary interest of young Sagan.

Carl Edward Sagan attended the David A.Boody Junior High School, but a year later his family moved to a nearby town, and Sagan began to attend Rahway High School. Sagan was a straight A student but was often bored by the unchallenging classes. His parents could not afford a private education for him. Sagan became the president of the Chemistry club and set up his laboratory at home.

After graduating in 1951, Sagan began to attend University of Chicago. He was only 16 years old, therefore he had to choose a university that accepted such young people. During his time as an undergraduate, Sagan wrote the thesis on origins of life. He received a B.A. in 1954 and B.S. in physics the following year. He continued his education and earned a Ph.D. in 1960 for his dissertation “Physical Studies of Planets”. Sagan began to work on a classified military Project A119 and had the Top Secret clearance at the U.S. Air Force and a Secret clearance with NASA.

In 1960, Carl Edward Sagan began his work as Miller Fellow at the University of California. He was also working on the NASA’s Mariner 2 team and was a Planetary Sciences Consultant to the RAND Corporation. In 1961, Sagan published an article in Science and was offered to give a colloquium at Harvard University. Instead, Sagan asked to be made assistant professor and eventually got the position. Sagan worked at Harvard from 1963 until 1968, and during the time, also worked at the Smithsonian Astrophysical Observatory.

In 1968, Sagan was denied tenure at Harvard and accepted a long-standing offer from Cornell University. There he remained a faculty member until his death. At the time, Sagan was already a celebrity-scientist, which Harvard found not suited for an academic. However, Cornell welcomed his recognition and made him a full professor and director for Laboratory for Planetary Studies in 1970. From 1950, Sagan began his work with NASA and the space program. He briefed the Apollo astronauts and contributed to many robotic spacecraft missions.

Carl Edward Sagan contributed to several discoveries about the solar system. He was central to the discovery of the high surface temperatures of Venus and the hypothesis that Saturn’s moon Titan might have oceans of liquid compounds. Sagan is probably best known for his research on the possible extraterrestrial life.

In 1980, Carl Edward Sagan became the co-author and narrator of the 13-part PBS series Cosmos: A Personal Voyage. The show won several awards and became the most widely watched series in the history of American public television. To accompany the series, Sagan also published a book Cosmos. Sagan also won the Pulitzer Prize for his 1977 book The Dragons of Eden.

After the success of Cosmos, Sagan became a frequent guest on The Tonight Show Starring Johnny Carson. Besides the previously mentioned books, Sagan also wrote Broca’s Brain: Reflections on the Romance of Science and the best-selling science fiction novel Contact. The book was adapted into a motion picture in 1997. In 1995, Sagan released the sequel to Cosmos, Pale Blue Dot: A Vision of the Human Future in Space.

Sagan often wrote about religion and was skeptical towards the conventional conceptualization of God as a sapient being. He was also a user and advocate of marijuana. He wrote that cannabis inspired some of his works and enhanced his sensual and intellectual experiences.

In the last years of his life, Carl Edward Sagan was suffering from bone-marrow disease myelodysplasia. As a complication, he got ill with pneumonia and died in 1996, at age 62.