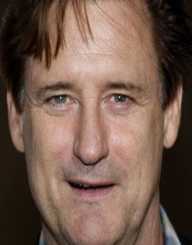 Bill Pullman is an American actor. He has played a number of roles including the President of the United States.

Bill Pullman was born on December 17, 1953, in Hornell, New York. His father James was a doctor and his mother Johanna was a nurse. Pullman is one of seven children.

Pullman graduated from Hornell High School in 1971. He studied building construction at SUNY Delhi in New York. After he transferred to State University of New York College at Oneonta, he graduated with a bachelor's degree in Theater in 1975. He later earned his Masters of Fine Arts in Theater/Directing at the University of Massachusetts in Amherst.

Bill Pullman's first job after college was not in front of a camera, but actually in front of a classroom. He was a professor at Montana State University. After a few years, he moved to New York and performed on stage. Later he moved to Los Angeles and found work in movies, including his debut in the 1986 comedy Ruthless People. The remainder of the 1980s included Pullman in different films from different genres. He showed his comedic side in Mel Brook's Spaceballs, his ability to deliver in horror films like Wes Craven's The Serpent and the Rainbow, and his romantic side in The Accidental Tourist.

The 1990s demonstrated more of his strength in the romantic comedy. He was the fiance to Meg Ryan's role in Sleepless in Seattle and the lead along with Sandra Bullock in While You Were Sleeping. However, his role as President Thomas Whitmore in the blockbuster Independence Day was the international blockbuster for 1996. He rounded out the decade with the action/comedy/horror film Lake Placid.

While Bill Pullman continued acting in films during the 2000s and 2010s, he found more consistent work in TV. Not only was he the villian in Torchwood:  Miracle Day, he even directed and produced the TV movie The Virginian. However, he was able to return to the Oval Office as the U.S. President in NBC's 1600 Penn.

Pullman continues to act in leading roles in television, most recently in the USA limited series event The Sinner. The biographical drama Backseat is scheduled for December 2018 in which he will portray Nelson Rockefeller.

Bill Pullman married Tamara Hurwitz in 1987. The couple has three children; daughter Maesa, a composer, and sons Jack, a special effects artists, and Lewis, an actor.

Pullman is a National Multiple Sclerosis Society Ambassador. He helps raise funds and participates in events such as Dinner of Champions and Walk MS in southern California.

Bill Pullman's The Virginian was the 2001 winner of the Bronze Wrangler of the Western Heritage Award for Television Feature Film.  He was also nominated for The Critics Choice Award for Best Actor in a Movie Made for Television or Limited Series for his role in The Sinner in 2018.