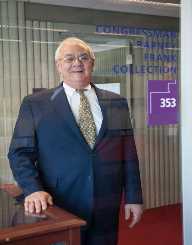 American politician and businessman Barnett Frank was born on the 31 March 1940 in Bayonne, New Jersey to Samuel and Elsie Frank. He has one sibling, a sister Ann Lewis.

Barnett Frank entered political life by working as the chief assistant to Boston Mayor Kevin White, and later for Massachusetts Congressman Michael Harrington. Then in 1972, Frank was elected to the Massachusetts House of Representatives. During that time he studied law at Harvard Law School and was admitted to the bar in Massachusetts in 1979.

During his time he supported the American Housing Rescue and Foreclosure Prevention Act. This law was passed in 2008 to protect homeowners from foreclosure.

Stuart Weisberg wrote a book about Frank entitled: Barney Frank: The Story of America’s Only Left-Handed, Gay, Jewish Congressman (2009). Frank himself is the author of Speaking Frankly: What’s Wrong with the Democrats and How to Fix It (1992).

Barnett Frank announced in May 1987 that he was a homosexual. At the time he said that he did so to put a stop to any speculation that may arise in the future. In 2012, Frank married his longtime partner Jim Ready at the Boston Marriott Newton in Massachusetts.