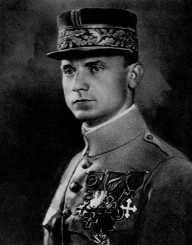 Milan Rastislav Štefánik was both on the 21 July 1880 in Kosaras, Austria-Hungary in what is today Slovakia. His parents were Pavol Stefanik and Albertina Jurenkova, and they had a large family of thirteen children. Stefanik senior was a pastor. Milan Rastislav was their sixth child.

After his high school years he studied in Prague (1898), then changed courses and enrolled at Charles University where his courses included astronomy, mathematics, and philosophy. Milan Rastislav Štefánik spent a semester at a university in Zurich in 1902 and obtained his doctorate in 1904. During his university years, he was exposed to political ideas regarding the future of Czechs and Slovaks, one of his lecturers was Tomas Garrigue Masaryk who would become the first president of Czechoslovakia.

After graduating, Milan Rastislav Štefánik moved to France and obtained work at the astronomical observatory at Meudon in Paris. He went on various scientific expeditions around the world.

He became a French citizen(1912). During his time at the observatory, he did a lot of international travel. One of this expeditions was to go to Tahiti to study Halley’s Comet in 1910.

When World War I broke out in 1914, he joined the French Army and was trained as a pilot. He quickly rose through the ranks to become a General.

During his university years and association with Tomas Garrigue Masaryk and like-minded people, Milan Rastislav Štefánik formed the opinion that if Czechs and Slovaks united, they could throw off the yoke of the Austrian-Hungarian Empire and become independent. The aim, now that the world was at war was to push for the Republic of Czechoslovakia if the Allies won. To this end, he founded Czechoslovak National Council with Masaryk and Edvard Benes. This council was responsible for forming groups of Czech and Slovak into fighters to assist the Allies. When the Allies won the war, Czechoslovakia was formed (1918-1919).

Milan Rastislav Štefánik was killed in a plane crash on the 4 May 1919 and did not live to see his dream develop. He had been appointed Czechoslovakia’s first Minister of Defence. He was flying home when the plane crashed shortly after flying into Czechoslovak airspace.

Conspiracy theories were quick to take hold, but an official inquiry blamed bad weather on the crash.

Milan Rastislav Štefánik is buried in a grand tomb on the hill of Bradlo, close to the town of Brezová in Slovakia. He is a national hero in Slovakia and is honored with monuments, place names and statues named after him. His childhood home is a museum.

The was a controversy in Cleveland, Ohio when a ninety-year-old statue of Milan Stefanik was relocated without consultation with the Slovak-American community. (Cleveland Historical Society).