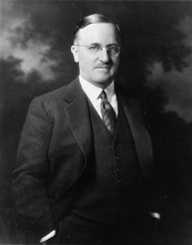 Arnold Orville Beckman was born on April 10, 1900, in Cullom, Illinois. His father George was a blacksmith and owned a little shop in Cullom. His childhood was spent in the village, where farming was a major interest. Beckman began showing interest in science at a young age. His father encouraged his interest and helped him to establish his chemistry laboratory in a tool shed.

After his mother Elizabeth died in 1912, Beckman’s father closed his blacksmith shop and began working as a salesman for blacksmithing tools. He often had to travel, and the children were put under the care of a maid. During this time, Arnold Orville Beckman joined a local band where he played piano. In 1914, the family moved to Normal, and he began attending the University High School. Just a year later, Beckman began attending chemistry university lectures by Howard W. Adams.

While in High School, Arnold Orville Beckman established the Bloomington Research Laboratories. In his research laboratory, he studied the chemical components of natural gas and other petroleum products. In 1918, he graduated from high school and joined the army as a chemist for defense forces in World War I. On his 18th birthday; he decided to join the United States Marine Corps. After finishing his three-month training in South Carolina, Beckman was posted at the Brooklyn Navy Yard.

After the end of World War I, Beckman began studying at the University of Illinois at Urbana-Champaign. He initially wanted to pursue a major in organic chemistry, but changed his mind, instead choosing physical chemistry. His decision was mainly due to poor health caused by toxic effects of mercury. In 1922, he completed his undergraduate studies in chemical engineering. He proceeded to obtain master’s degree, and his main interest was in the thermodynamics of aqueous ammonia solution. He gained his Master’s Degree in physical chemistry in 1923. He proceeded his academic education at the California Institute of Technology, but after one year left the institution to work at the Western Electric Company in New York. He returned to Caltech in 1926 and completed his studies, with a doctoral dissertation on devising a method to calculate the energy of ultraviolet rays.

After finishing his academic education, Arnold Orville Beckman was offered a position as a research instructor for chemistry at the University of California. He began teaching in 1929 and was subsequently promoted to professor in chemistry. During this time, Beckman also carried out research, with his main interest being the need for precise and accurate instrumentation. He also started to work as a consultant outside of the university.

In 1934, Arnold Orville Beckman was working for the National Postal Meter Company and started his first business. He began manufacturing a non-clogging ink to use for postage printing machines. The company was named National Inking Appliance Company. Although he patented his non-clogging ink, the company failed to gain any buyers. He was approached by the Sunkist Growers company which had difficulties of measuring the acidity of their products. Beckman began working on a solution for this problem and developed a vacuum-tube amplifier. He soon improved his design thus creating the first pH meter, which he patented in 1934.

After the success of pH meter, Arnold Orville Beckman renamed his company to National Technical Laboratories and focused on manufacturing scientific instruments. The company quickly picked up, and he quit his job at the university in 1939 to focus on the operations of the company. In 1940, he asked for a loan for establishing a factory and built a 12,00 square feet factory in South Pasadena. The same year, he also developed a device to measure the light energy in the visible spectrum. The new device was named the DU spectrophotometer, and significantly reduced the time required for obtaining results from sample analysis. His device was used in the production of penicillin during World War II.

In 1942, Arnold Orville Beckman was asked to develop a spectrophotometer for measuring the light energy in an infrared zone and developed the IR-1 Spectrophotometer.Beckman was also involved in the production of the Pauling oxygen meter for the National Defense Research Committee. The device was meant to measure the concentration of oxygen in submarines and airplanes during the war but was later also used to measure oxygen levels in incubators for premature babies.

Arnold Orville Beckman remodeled his pH meter and dosimeter, allowing it to be used for measuring exposure to ionizing radiation. His design was used in the Manhattan Project. In 1948, Beckman became the scientific consultant for Air Pollution Control Districts officer. He and his colleagues were developing methods for combating the smog in Los Angeles. He designed a device to measure smog and contributed to creating the Air Pollution Foundation.

In 1950, Beckman renamed his company to Beckman Instruments, Incorporated and the company went public. Over the next couple of years, the company expanded. In 1954, Beckman Instruments began manufacturing centrifuges. He founded the Shockley Semiconductor Laboratory, headed by the Nobel laureate William Shockley. During the late 1950s, his company acquired Berkeley Scientific Company and began manufacturing analog computer systems.