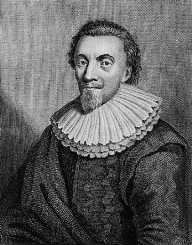 George Calvert was an English statesman and colonizer.

George Calvert was born around the year 1580 in Kipling, North Yorkshire, England. His father, Leonard Calvert, was a wealthy man. His mother, Alice Crosland, was a woman of noble origins. His family was Roman Catholic.

Despite his Catholicism, Calvert was forced to study with a Protestant tutor. In 1593, he enrolled at Trinity College at Oxford University. There, he studied foreign languages and literature. He received his degree in 1597. The next year, he continued his studies in London. He spent three years studying law at The Honorable Society of Lincoln’s Inn.

Calvert had a great interest in the exploration of the New World. He invested in the Virginia Company and in the East India Company. In 1620, he bought some land in Newfoundland. He named the area Avalon and tried to establish a colony there. He sent several groups of settlers there over the next few years. His plan ultimately failed, mostly because of the bad weather. In 1629, he went to Jamestown, Virginia. His goal was to establish the new colony of Maryland. He returned to London and started lobbying for the approval of his new charter.

Baron Baltimore passed away on April 15, 1632, at Lincoln’s Inn Fields. His body was buried at the Saint Dunstan Churchyard in London. A few weeks after his death, the English Parliament accepted his charter for Maryland.