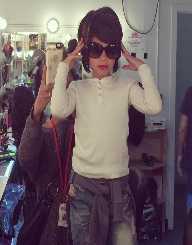 Ariana Greenblatt was born on the 27th day of August in the year 2007. She warmed up to the stage at quite a young age, and by the time she was 8, she was already in the limelight. She has become a familiar face on TV, and she has cut an impressive role for herself.

Ariana has also shown interest in sports and dance in addition to getting a spot on the list of rising stars on the Hollywood skyline. Attaining remarkable success and acclaim is not easy around Hollywood, but she has it all going for her already.

In her early years, Ariana Greenblatt was spotted as an impressive dancer, and she excellently showed this in several shows and local competitions. She was able to get a role on the sets of Liv and Maddie, which was her debut on daytime TV in the United States.

Ariana featured in an episode of Liv and Maddie, which was titled Joy-A-Rooney. She easily became recognizable after that, and viewers were on the lookout for her. She was able to get a lead role in Stuck in the Middle by the Disney Channel. This was in 2016, and her debut was well-received.

Ariana Greenblatt also showed up on the set of Legendary Dudas on Disney channel in 2016, and she enjoyed her time during the first season. She was eager to meet up again with her cast and crew, and this became a reality when the second season contract was signed. Ariana was overjoyed when this came to be, and she showed it.

The Disney movie premieres are one of her favorite sessions, and she enjoys meeting with other leading lights of the industry. She was at the premiere of Moana and The Jungle ID during the opening season for 2016. This was the time she got presented with the Disney channel ID officially.


Stuck In The Middle Fame

There is no doubt that Stuck in the Middle was a launch pad for Ariana Greenblatt, and the bubbly girl was the centerpiece of the show. She got rave reviews and won the hearts of many kids and families across the globe with her role.

Her blend of intelligence and cuteness is such that puts her in good stead so that she easily resonates with the audience. Her effortless portrayal of her character is a statement of ease and sheer rapport.

Ariana gets along with the co-stars on set so well that she has also become a social media hit. Her social media account is updated her parents regularly. Her images and itinerary are put here so that her fans can keep up with her unfolding career.

Ariana’s Instagram following already hit the 319k mark as at 2016 while the Twitter following was over 3700. On Facebook, she already has more than 12.500 fans who form the crust of her core following.

Ariana Greenblatt was estimated to be worth more than 30,000 USD as of 2016. Her actual earnings were not put in the glare of the public as non-disclosure agreements barred it. The fact that she is a minor gives her a leeway to be protected.

It is clear though that Ariana earns some good salaries from the shows she has featured into the date. And her season’s income from the running sitcoms just keeps coming.

Ariana Greenblatt enjoys outings with her friends as well as on shopping sprees. Her fortunes are sure to soar as her earnings get reinvested for capital and incremental gains over the rolling years. Her parents are also reputed to be rich, and this means that her fortune can be shielded for the long haul.

Ariana Greenblatt has adjusted to the big screen, and she looks poised to take on bigger roles as the years unfold. She has expressed her views on seeing more women empowered and extending happiness to all those who suffer deprivation. Her smile is always disarming, and she is cut out to spread the joy of living.

Ariana Greenblatt is portrayed as a witty, pretty and adorable youngster who has got bags of humor under her belt. Her poise and confidence in the full glare of the camera are not in doubt that some big stars shudder at her élan.

The dressing up part that is attached to the roles she has played is one that she thoroughly enjoys. She loves the trends that fashion unveils, and she has shown this a couple of times.

At the premiere of Moana, Ariana adorned a flower-printed breezy dress that was held up with an attractive garland of flowers serenading her neck. That was topped by the sight of a pink flower that hung on her hair is such gentle and resplendent fashion. She cut a picture of the quintessential Hawaiian Princess!

Ariana Greenblatt is known to have an older brother, who is named Gavin.