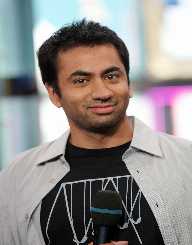 Kal Penn was born on April 23rd, in 1977. He is famed for being a talented American actor. Aside from this, he is into some professions including a chef, civil servant, and a producer. He is best hailed for the role of Kumar Patel that he played in the film Harold & Kumar. Other films that also gained him nationwide recognition include Van Wilder, Cosmopolitan and Love Don't Cost a Thing. He has also been active in the TV industry with shows such as House, How I Met Your Mother and Designated Survivor.

Kalpen Suresh Modi was born on April 23rd in 1977. His birthplace was in Montclair, New Jersey. He was the son of Asmita and Suresh Modi. They were Indian immigrants. His father worked as an engineer while his mother worked in a perfume company as a fragrance evaluator.

Growing up, Penn had aspirations of one day becoming a performer. This was a different career path from what his parents had in mind. They wished that their son would one day take on a law career or become a doctor. Penn also sidelined himself from joining soccer teams at school. Instead, he went ahead and joined one of the drama clubs. During his first ever performance at school, his parents realized that their son was indeed a talented performer.

Penn’s parents showed support to the career path that he had opted to pursue. Accordingly, he joined the Howell High School. Here, he went on to study performing arts. Shortly after, he enrolled with Freehold Township High School where he completed his junior year. Later, he went to University of California in Los Angeles. Again, he majored in a career path that would make his dreams come true. He specialized in performing arts and sociology.

During the late 90s, Kal Penn landed on some TV shows such as Spin City, Sabrina, the Teenage Witch and Buffy the Vampire Slayer. At first, Penn was unimpressed with the ethnic roles that he was landing at the time. It was this feeling that pushed him to anglicize his name and became Kal Penn. After that, things improved as he landed on more roles both on film and on TV.

His third film was with his role in the 2001 drama movie called American Desi. The following year, he featured in Van Wilder. The film was received by numerous critics claiming it as not funny. Nonetheless, it was a success to Penn as it opened doors for more film roles.

Two years later, Penn’s first commercial success came with the role Kal Penn played in Harold and Kumar go to White Castle – 2004. The film was an international hit, and he went ahead and reprised his role in two of its sequels in 2008. Previously, Penn took a minor role in Superman Returns- 2006.

The following year in 2007, Penn was cast as a terrorist named Ahmed Amarin the hit series 24. He appeared for four episodes in the 6th season of the TV series. Other renowned series that Penn has featured in include How I Met Your Mother, Battle Creek, Designated Survivor and Superhuman

Apart from being active both in film and on TV, Kal Penn has earned a name for himself in politics. During the Obama’s administration, he was chosen to serve as the director of Office of Public Engagement at the White House. He had to use his original name while offering public services for the government. For a short period, in 2010, he left office to continue with the hit sequel on Harold and Kumar. He returned to his public post after six months.