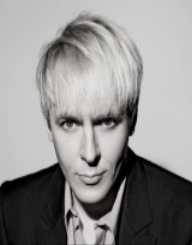 Nick Rhodes was born on June 8th, in 1962. He is a notable English musician particularly for being one of the founding individuals of the band group called Duran Duran.

Throughout his music career, he has worked with several groups such as Arcadia and the Devils.

Nick Rhodes was born on June 8th, in 1962. At the time of his birth, Nick was given the name Nicholas James Bates. He was the only child of her parents.

Nick Rhodes enrolled with Woodrush High School situated in Wythall, north Worcestershire. However, he did not complete his education as he left in 1978. Around this period, he partnered with the likes of John Taylor, Stephen Duffy and Simon Colley to come up with the band Duran Duran.

In 1982, Duran Duran released their album called Rio. This was a massive hit as the band housed some notable tracks such as “Rio” and “Hungry Like the Wolf.” Despite the fact that Nick was unschooled in the group, he was a major driving force to the team. Their creativity on stage was demonstrated with the release of songs such as “Save a Prayer,” “A View to a Kill,” “Ordinary World,” and “Come Undone.”

In spite of the band’s slight failure in the late 1980s more so after releasing the band called Big Thing -1988, they hit the headlines in 1993. During this time, they had released Duran Duran. This album was also given the name “The Wedding Album.” Some of the singles that performed well include “Come Undone” and “Ordinary World.”

Nick Rhodes tied the knot with Julie Anne Friedman in 1984. Their marriage ended in a divorce as the two parted ways in 1992. From this relationshipNick Rhodes had one daughter named Tatjana.