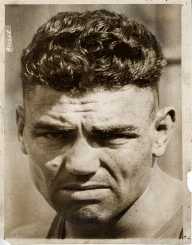 His father worked as a school teacher there. They were converted to Mormonism by a group of missionaries called Latter-Day Saints. They were then moved to the small village called Mormon in Manassa, Southern Colorado, the birthplace of Jack Dempsey. After having moved away from West Virginia, Hyrum and two older brothers of Jack Dempsey had to travel a lot searching for a suitable job. All of them used to work as miners and often moved around the region of Utah and Colorado in search of work.

Jack Dempsey began supporting his family during his preteens and started his first job of picking crops on a farm near Steamboat Springs, Colorado. He spent the next few years working as a miner, cowboy and as a farm hand. His family was finally able to settle in Provo, Utah after he turned 12.

He enrolled at the Lakeview Elementary School there only to drop out after the eighth grade. After abandoning his studies, he started working full time doing all kinds of odd jobs including shoe shining, picking crops, unloading works and working in a sugar factory, all for some paltry sums.

Upon attaining the age of 17, Jack Dempsey found himself to be an agile boxer eager to conquer the world with his boxing skills. His older brother Bernie Dempsey, a boxer himself, taught him the nuances of becoming a champion boxer including tips like chewing pine targum to toughen his jaws and soaking his face in the salty water to harden his skin.

Jack Dempsey realized the fact that his boxing potential could be effectively used to earn much more money than what he was making so far by doing all those menial jobs when he turned 17. He started visiting saloons spread across the mining towns of the regions and used to throw challenges to beat him and placed bets on the outcome of the fights. To his good fortune and astonishing boxing capabilities, he won almost all those fights and the bets placed on it.

He also worked as a bodyguard of Thomas F. Kearns, President of The Salt Lake Tribune, a daily newspaper printed and published from the Salt Lake City and his son, a U.S. Senator from Utah. From 1911 to 1916, he made Peter Jackson’s saloon in Salt Lake City his base camp and organized all his fights through an agent named Hardy Downey. He used the pseudonym ‘Kid Blackie’ in those fights. In his debut fight in Salt Lake City, he fought against a boxer known as ‘One Punch Hancock’ and ironically knocked him out in just one punch.

In 1914, Jack Dempsey's older brother Bernie fell ill before a prizefight, which he often undertook to earn money. He fought the bout replacing his brother and used the name Jack Dempsey for the first time which his brother was using till then in all his fights in memory of the great 19th century boxer Jack "Nonpareil" Dempsey. He won the bout convincingly and from then on started using the name in all his lifelong career fights.

Over the next three years, he gained confidence and garnered enough reputation as a fierce boxer and fought a number of good-paying boxing bouts in and around San Francisco and along the East Coast.

The day of his reckoning came along when Jack Dempsey was pitted against the world heavyweight boxing champion Jess Willard, better known to the world by his nickname "The Great White Hope." They were to fight for the world championship title to be held on July 4, 1919, at Toledo, a city in northwest Ohio. Dempsey won the fight decisively knocking down his opponent seven times in the first round itself. He was declared the new World Heavyweight Boxing Champion after the conclusion of the third round.

Willard later admitted how agile, ruthless and a remarkable hitter Dempsey was on that very day. Dempsey held the title for the next seven years, two months and 19 days thus becoming the longest reigning world boxing champion in the history of boxing. He defended his title by winning the championship fight five consecutive times.

Jack Dempsey married Maxine Gates on October 9, 1916. The marriage ended in divorce on April 2, 1919. He married Estelle Taylor on February 7, 1925. They divorced during 1930. He tied the nuptial knot for the third time to Broadway singer Hannah Williams. The marriage ceremony took place on July 18, 1933. They divorced on July 7, 1943, after having two children together.

Finally, he married Deanna Piatelli during 1958 and lived with her for the remaining period of his life. On May 31, 1983, Dempsey breathed his last in his New York City home at the age of 87 due to heart failure. His mortal remains are entombed in the Southampton Cemetery in Southampton, New York.