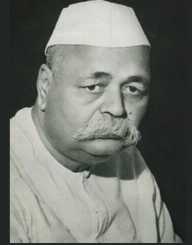 A great freedom fighter and a follower of Mahatma Gandhi, Govind Vallabh Pant was a lawyer, a revolutionary and the Home Minister of India. The ideas of Gokhale also influenced him. Govind Vallabh Pant was actively involved in every movement started by Mahatma Gandhi including the Non-cooperation movement and the Satyagraha. In his fight for the Independence of India, Pant was jailed multiple times.

Govind Vallabh Pant served as the first Chief Minister of Uttar Pradesh and today is remembered as the man who abolished the Zamindari system in the state. When he became the Home Minister of India, he played a key role in deciding the state boundaries on linguistic lines.

Pandit Govind Ballabh Pant was born on September 10, 1887, to Govinda Bai and Manorath Pant. His star sign was Virgo, and his birthplace is Khoont, Almora.

Manorath Pant worked for the government and continuously traveled so young Govind stayed with Badri Dutt Joshi, his maternal grandfather. He had a deep influence on the mind of young Govind.

Govind Vallabh Pant was a bright student. He graduated high school from the Samay College, Almora. His excellence at studies earned him a scholarship to the Muir College, Allahabad where he took the special interest in Math, English, and Politics.

Like every youth of the time, he was filled with feelings of patriotism after listening to revolutionary leaders. For Pant, it was Gokhale whose speech motivated him. He read the works of other great men like Bankim Chandra, &DadabhaiNaoroji and his patriotic feelings grew. He continued his studies however and was awarded the Lumsden Gold Medal for excellence.

Govind Vallabh Pant came into conflict with the British Raj early in his career. He championed the case of villagers in Kashipur and objected to the practice of coolie beggars – where locals had to carry the luggage of British officials for free. This made him immensely popular with the common masses. Pant entered politics shortly after and became a member of the Legislative assembly of Agra and Oudh. Govind Vallabh Pant also started a weekly titled Shakti for which he collaborated with PanditBadridhar Pandey. He highlighted the problems of the people in the Kumaon region, further angering the British.

Govind Vallabh Pant was arrested several times in the following years for various charges including organizing a salt march like Mahatma Gandhi. He was a fluent speaker and became the Deputy leader of the Congress in 1935. He became the first Chief Minister of the United Provinces and brought several reforms including the abolition of the Zamindari system, improvement in the status of women and their right to ancestral property.

Govind Vallabh Pant arrested again in 1940 for taking part in the Satyagraha, and in 1942 for the Quit India Movement. In 1945, he once again became the chief minister of the United Provinces and continued even after independence from the British Raj. Govind Vallabh Pant became the Home Minister of India in 1955. His most important work as a home minister was the demarcation of state boundaries on linguistic basis.

Govind Vallabh Pant also made Hindi the official language of the Union of India and many states.He died holding the office due to a heart attack

Like many freedom fighters of the time, much information about Pant’s personal life is not available publicly. He had three children – one son Krishna Chandra Pant who was also a politician, and two daughters Lakshmi and Pushpa.

Govind Ballabh Pant got a heart attack in 1960. He was 73 years old then and serving as the Home Minister of India. Although the best doctors of the country treated him, his body was very weak. He died on March 7, 1961, aged 74