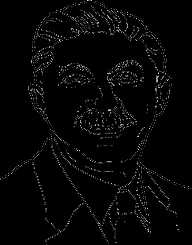 Psychologist Abraham Maslow was born on the 1 April 1908 in Brooklyn, New York into a family of Russian-Jewish immigrants.

Abraham Maslow was a pupil at the City College of New York and later studied psychology at the University of Wisconsin. In 1931 he was awarded an M.A. in psychology. By 1934 he had his first papers published by his professor. He worked under Alfred Adler at Columbia University and then moved to Brooklyn College (1937-1951), It was this time that he began developing his theory which he named humanistic psychology.

He was a professor at Brandeis University (1951-1969) and he was a resident fellow at the Laughlin Institute.

His theory of self-actualisation based on his development of the idea that each individual has a hierarchy of needs established his name in the field of psychology.
Publications include Toward A Psychology of Being and Motivation and Personality.

After suffering a heart attack in 1967, his health deteriorated. Abraham Maslow died on the 8 June 1970 in California.