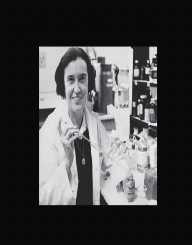 Rosalyn Sussman Yalow was born in July 19, 1921. She was an American medical physicist and a biochemist. In 1977, she was awarded the Nobel Prize in Physiology or Medicine for developing ‘radioimmunoassay’ (RIA technique). She also discovered the underlying mechanism which caused type II diabetes.

Rosalyn Sussman Yalow was born in July 19, 1921 in the Bronx, New York. She was born to Simon Sussman and Clara Zipper. She was brought up alongside her brother, Alexander. Her parents were not learned and so they instilled the art of reading and writing into their children by enabling them attend the public library. She attended Walton High School in the Bronx. As a student she developed an interest in mathematics and chemistry and other science subjects. She later joined Hunter College where she studied nuclear physics.

In 1941, she graduated from the college with honors. Yalow later joined a business school where she studied for a short while. In 1941, she became an assistant teacher in the Department of Physics of the University of Illinois at Champaign-Urbana. She was the only female member of the faculty members of the College of Engineering. In 1945, she obtained her PhD in Physics from the University of Illinois.

In 1945, she returned to New York where she joined the Federal Telecommunications Laboratory as an assistant engineer. In 1946, the laboratory closed down, and she went back to Hunter College. In the same year, Yalow became a Physics teacher at Hunter College, a post she held up to 1950. She taught both women and veterans who returned from war. In 1947, she became a part time consultant of nuclear physics for the Bronx Veterans Administration Hospital. She worked a physicist and an assistant chief of the Department that dealt with radioisotopes.

While she was at Hunter College, she began her research on the effects of radioisotopes on different diseases. She did this with the help of physicist Solomon A. Berson. Yalow developed the RIA technique after her research on the causes of type II diabetes. The technique showed that foreign insulin created antibodies that clung to the insulin and reduced its effectiveness against glucose. She was later appointed the Chief of the Nuclear Medical Service of the Veterans Administration Hospital. The technique she developed assisted also in the detection of hepatitis virus and in the making of decisions as to the effective dosages of antibiotics. In 1979, she was appointed a distinguished professor at large of the Albert Einstein College which was under Yeshiva University. In 1985, she became a Solomon A. Berson distinguished professor at large at the Mount Sinai School of Medicine.

In 1943, she got married to Aaron Yalow with whom she had two children, Benjamin and Elanna. She died on May 30, 2011, in New York City. She died at the age of eighty nine.