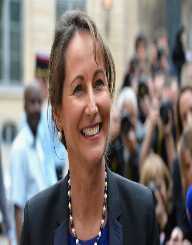 French politician Ségolène Royal was born on the 22 September 1953 in Ouakam, Dakar in French West Africa to Hélène Dehaye and Jacques Royal. Due to her father’s occupation she was born on a military base. Today the area where she was born is known as Senegal.

Ségolène Royal was working in an administrative court when an adviser to President François Mitterrand noticed her ability and persuaded her to join his staff. By doing so, she became a junior chargee de mission from 1982 until 1988.

In 2004 Ségolène Royal became president of the Poitou-Charentes regional council. She announced in 2005 that she would run for president in 2007. In the final round of voting in 2007, she lost to Sarkozy who won 53% of the vote. Royal decided to run for the leadership of the Socialist Party in 2008 but was not chosen.

In 2014 Ségolène Royal was appointed as Minister of Ecology, Sustainable Development, and Energy.

Before they split up in 2007, Ségolène Royal was in a long-term relationship with French politician and President of France Francois Hollande. They had four children together: Thomas (1984), Clémence (1985), Julien (1987) and Flora (1992).