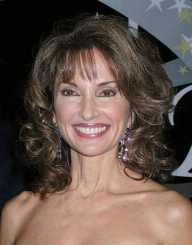 Susan Lucci was born on December 23, 1946, in Scarsdale, New York, USA. Her parents are Jeanette nee Granquist and Victor Lucci. Her brother is James Lucci.

As a young adult, Susan Lucci attended Marymount College, where she later graduated from.

Susan Lucci first began her acting career in 1967 when she appeared as a bit character on the show Love Is a Many Splendored Thing. Later on, in the same decade, she also had small roles in the films Goodbye, Columbus, and Me, Natalie. In 1970, Susan Lucci took on her the role that would make her most famous: Erica Kane on the soap opera, All My Children. She acted on this show for the entire decade.

Susan Lucci began taking on more roles in the 1980's. However, most of these roles were as bit characters in television shows and made-for-television movies. Some of the movies and television shows she worked on during this decade included The Love Boat, Fantasy Island, The Fall Guy, Mafia Princess, and Lady Mobster. She also continued acting on All My Children throughout this entire decade.

In 1990, Susan Lucci took on the recurring role of Hillary Taylor on the television show, Dallas. She stayed on this show only until 1991.  For the rest of this decade, she continued to act on All My Children, as well as several made-for-television movies, including The Woman Who Siner, Between Love and Hate, French Silk, and Blood on Her Hands.

During the 2000’s, Susan Lucci mostly remained focused on her role on All My Children, which she continued to do for the entire decade. She also worked on several television shows in small roles. These shows include Hope & Faith, Higglytown Heroes, and That’s So Raven.

Susan Lucci finally retired from her role in All My Children in 2011. However, she took on another long-running role on the show Devious Maids as the character Genevieve Delatour in 2013. She worked on that show until 2016. Other shows and films she has worked on in this decade include Army Wives, Hot in Cleveland, Joy, and Difficult People. As of 2017, Susan Lucci continues to act in television and film.

After All My Children was canceled in 2011, Susan Lucci spent the time working on a memoir titled All My Life. This book gave an inside look at her personal life and what it was like to work on the same soap opera for decades.

In the 1990’s, Susan Lucci began selling her own beauty products. Some of her products were released under the Susan Lucci Collection. Her beauty projects can still be purchased today.

Over the course of her long acting career, Susan Lucci has won more than a dozen awards and has been nominated for two dozen others. Some of her most impressive awards are listed below.

Susan Lucci has also been known to be a highly charitable person. She often donates money to many medical organizations, as well as charities that help children. Some of the charities she is involved with include the American Cancer Society, the Muscular Dystrophy Association, the Ovarian Cancer Research Fund, the Red Cross, and the Wish Upon A Hero Foundation.

Susan Lucci married Helmut Huber in 1969. Together, this couple has two children: Andreas and Liza.