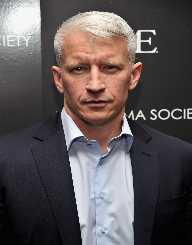 Cooper had been connected to media from an early age. As a baby, he was photographed for Harper’s Bazaar. When he was 3 years old, he and his mother appeared on The Tonight Show. When he was 10 years old, Cooper started modeling with Ford Models for Ralph Lauren and Calvin Klein until he was 13 years old.

Cooper suffered from several personal losses. His father died in 1978, after series of heart attacks and an open-heart surgery. In 1988, Cooper’s older brother Carter committed suicide by jumping from the 14th floor terrace of Vanderbilt’s penthouse apartment. Cooper has cited his brother’s suicide to inspire him to become a journalist.

Cooper attended the private Dalton School and after graduating, traveled around Africa. Afterwards, he went to Yale University, where he majored in political science and graduated in 1989. During his time in college, Cooper spent two summers as an intern at the CIA. He was considering staying with the agency, but decided to pursue journalism career, despite having formal education in journalism.

After graduating from Yale, Cooper tried to find work for ABC, but he was unsuccessful. At the time he was working for Channel One as facts checker. During his time, he went to Myanmar and met with students with a forged press pass. He sold his segment about students fighting Burmese government to Channel One. After his time in Burma, Cooper spent a year in Vietnam and studied the language at the University of Hanoi. At the same time he was also filming and reporting on Vietnamese life and culture. His reports later aired on Chanel One. Cooper continued to film and report stories on several war-torn regions around the world, like Somalia, Bosnia and Rwanda.

In 1995 Cooper became a corresponded for ABC News, later becoming the co-anchor on its World News Now program. In 2000, he switched to hosting ABC’s reality show The Mole. In the show’s second season, Cooper left ABC and joined CNN, after the 9/11 attacks happened. He was an anchor on American Morning.

In 2003, Cooper became the anchor on his show Anderson Cooper 360?. On the show, he has covered several important stories, like about the tsunami damage in Sri Lanka, royal wedding of Prince Charles and Camilla Parker Bowles and Niger famine from Maradi. Cooper was reporting on Hurricane Katrina and confronted several senators on their perception of government response. He launched a trend referred to as emo-journalism, which skyrocketed CNN’s ratings and brought Cooper to stardom.

In 2005, Cooper was reporting on the unusually violent hurricane season, and News Night was changed from 60 to 120 minutes. To deal with the workload, he was added a co-anchor Aaron Brown. Coopers 360 was later expanded into 2 hour program. In 2007, Coopers salary was increased to $4 million.

After his major success, Cooper began hosting a documentary program Planet in Peril. The following year he was a part of a team of National Geographic’s Explorer sequel Planet in Peril: Battle Lines.

In 2010, Warned Bos and CNN announced a talk show Anderson Live. The show ran for two seasons, since it failed to attract the hoped ratings. Cooper was also a moderator in 2016 presidential election debate between Hillary Clinton and Donald Trump. Cooper is also a freelance writer, and has authored several articles. He published his memoir Dispatches from the Edge in 2006.

Cooper has two half-brothers from his mothers marriage to conductor Leopold Stokowski. In 2007, he announced that as a child he suffered from dyslexia and still has it in a “mild form”.

Cooper is openly gay. He was trying to maintain his privacy, but in 2012, allowed The New York Times publish his email about his sexuality. Cooper is dating a barn owner Benjamin Maisani since 2009.