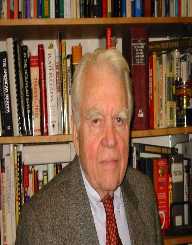 Andrew Aitken Rooney was an American television and radio writer. Born on January 14, 1919, he was known for hisweekly segment, “A Few Minutes with Andy Rooney” on the CBS News programme 60 Minutes. He worked in that capacity from 1978 until he died in 2011. His last appearance on 60 Minutes was aired on October 2, 2011. As a war reporter during the World War II, he was one of the first American journalists to visit the German concentration camps after the war.

Andrew Aitken Rooney was born on January 14, 1919, in Albany, New York to Scott Rooney and Ellinor(Reynolds) Rooney. He received education at The Albany Academy and after graduation enrolled at Colgate University in Hamilton, New York. He was drafted into the US Army in August 1941.

Rooney began his writing career during his military service. During the World War II, he started writing for Stars and Stripes in London in 1942. He was one of the six correspondents who on the second American booming over Germany while flying with the Eighth Air Force. He was also one of the first American journalists to visit Nazi concentration camps prior to the end of the war. His war experience would influence his later writing and reporting. Rooney received a Bronze Star Medal and Air Medal for his service asa war correspondent in combat zones.

In 1949, Andy Rooney joined the Columbia Broadcasting System (CBS) as a writer for television and radio show Talent Scouts by Arthur Godfrey. The show became very popular reaching number one in 1952. Since then, Rooney and Godfrey became friends and partners. He also wrote for the daytime radio and show Arthur Godfrey Time. From 1959 to 1965, he wrote for The Garry More Show, which was also a hit. Within that same period, he wrote for The Twentieth Century, a public affairs program on CBS among others.

He did two episodes for the CBS News documentary series Of Black America. One of the episodes “Black History: Lost, Stolen, or Strayed” in 1968, won him an Emmy award. Rooney had to quit CBSin1970 after the network refused to broadcast his memoir on the World War II titled ‘An Essay on War’. He instead read it on PBS, becoming his first appearance on TV. The show won him a Writers Guild Award in 1971.

A Few Minutes With Andy Rooney

In 1978, Rooney began the end of show segment “A Few Minutes with Andy Rooney” on CBS’s 60 Minutes. It initially started as a summer replacement for “Point/Counterpoint”that featured James Kilpatrick and Shana Alexander. During thesegment, Rooneycreated a satire of daily issues including faulty Christmas presents, prices of groceries and annoying relatives. The segment became very popular among viewers and eventually replaced “Point/Counterpoint.”

Rooney’s career was characterised with several controversies. In 1990, CBS News President David Burke handed him a three months suspension without pay for his comments that "too much alcohol, too much food, drugs, homosexual unions, cigarettes [are] all known to lead to premature death."

However, after his suspension, rations of 60 Minutes dropped by 20 percent, and that forced management to recall him four weeks into his suspension. His comments on the suicide of Kurt Cobainin 1994 generated controversies. He has expressed his anger that the suicide of “unknown” Cobain overshadowed the death of Richard Nixon. He said he had never heard of Cobain or his band, Nirvana, adding that the suicide made him very angry as "a lot of people would like to have the years left that he threw away."

Andy Rooney married Marguerite “Margie” Rooney (nee Howard). They married for 62 years until the death of Margie in 2004. The couple had four children Brian, Martha, Emily, and Ellen.