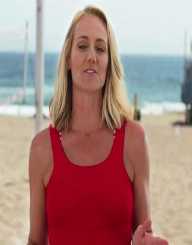 Jennifer Anne Kessy was born on July 311977 in San Juan, California. She is one of the three children of Ronald and Charlotte Kessy. Her siblings are Travis and Ryan Kessy. She grew up in California and went to Dana Hills High School situated in Dana Point, California. She started exploring her sporting talents while in high school. Kessy represented her school in multiple disciples. She participated with the high school team in swimming and became the captain of the volleyball team. She graduated from high school in 1994.

Kessy then enrolled for a degree course at the University of Southern California on a sports scholarship. She graduated with a Bachelor of Arts degree majoring in History in 1998. Kessy maintained her athleticism in college. She played in the college volleyball team all through her stay at the university.

Upon leaving college, she chose to play professional volleyball. She signed a contract to join the Chicago Thunder in the United States Professional Volleyball League. She helped her team come second in 2002. After the league disbanded in late November of 2002, Kessy left the US for a career abroad. She went to the US territory of Puerto Rico. She started playing for Pinkin de Corozal in the city of Humacao. She finished sixth in 2003 with her team in her first season.

On the backdrop of her performance in Puerto Rico, Kessy returned to the US and joined the Association of Volleyball Professionals or AVP. In 2004 she competed in her first competitive professional beach volleyball match against former US Olympian Barbara Fontana. In 2005 she competed against another decorated Olympian Holly McPeak. Her performance against the two professionals elevated her status as a rising star in the sport.

In 2007, she teamed up with her former college teammate April Ross. The two resolved to qualify with the US team to the 2008 Beijing Olympics. They started their qualification campaign by entering the 2007 Federation of International Volleyball competition held in Stavanger, Norway. They surprised their opponents with their performance. They went into the tournament as the number 29th seeded team in the rankings. Despite being the lowest seeded team in the championships, Kessy and Ross went on to win the tournament beating the Brazilian duo in the finals. They finished runners up in the 2008 AVP tournament but failed to qualify for the Olympics. The pair came in third in the Olympic qualifiers when only two teams were allowed from each country.

Kessy and Ross rededicated their efforts to make it to the 2012 London Olympics. With a new traveling coach and intensive training, the pair set out for the quest for Olympic glory. In 2009, they competed in the AVP tour of ten events. They were finalists in nine out of the ten. They eventually won four of the nine finals. Kessy and her partner Ross made it to the London Olympics. They won silver after losing the finals of the women doubles beach volleyball finals to their fellow Americans. Misty Treanor and Kerri Jennings won the gold with an impressive 21-16 in both sets.

Kessy took a sabbatical from volleyball to start a family. She skipped the 2014 season due to the pregnancy of her first child. She returned in the 2015 AVP tour and teamed up with Emily Day. They competed in 2015. Kessy played her last competitive match in 2016 before going into coaching. Apart from the Olympics and AVP tournaments, Kessy competed in the FIVB and International Beach Volleyball grand slams with impressive performances.

Kessy stayed out of the volleyball scene for one year after her retirement. She came back as a coach in 2017. In 2017 she started coaching the Winter Beach Elite Team in Dana Point in California. Kessy was called up to the US national team for the 2018 FIVB events. She coached the US team of Alix Klineman and her former teammate April Ross to win the 2018 FIVB championships.

In her career, Kessy won numerous titles and outstanding awards. In 1994, she won the All-California Interscholastic Federation award. Two years later, she became an All-American in volleyball. She took the AVP Most Improved Player in 2004. Four years later in 2008, Kessy won the Best of the Beach award in the AVP tour. She repeated the fate in 2009. She won the Beach Volleyball Team of the Year with April Ross in 2009.

Kessy married Aaron Boss in 2005. She divorced her first husband in 2009. She remarried her present husband Andy Ces, a French beach volleyball player in March 2013. The couple has two children and lives in California with her family.

Jennifer Kessy is a decorated beach volleyball legend in the US. In her closet of titles, she has a collection of titles. She won the FIVB, Grand Slam and AVP titles. She is also a decorated Olympian with a silver medal from the 2012 London Olympics.

As a coach, she has an FIVB title. Kessy has continued mentoring young talent in readiness for future competitions in the US and globally.