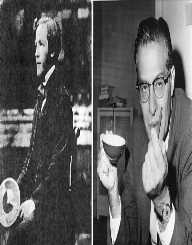 Julian Schwinger was born on February 12, 1918, in New York City, New York, USA. His parents were Belle (Rosenfeld) and Benjamin Schwinger. He also had an older brother, Harold.

From a young age, it was clear that Julian Schwinger was an intelligent person. He surpassed his peers through his school years. While in school, he became fascinated with mathematics and science; more specifically, he became highly interested in physics. In fact, he was so far ahead in school that he graduated from Townsend Harris High School when he was only 14 years old.

After finishing high school, Julian Schwinger went on to attend the City College of New York. Here, he focused his studies on physics. Even though he was an intelligent young man, he did not do well in his classes. Julian Schwinger spent much of his time reading things that he found to be interesting, like science journals, instead of the required readings for the classes he was in.

He also failed to show up for all of his classes, which also lowered his grades. While at this college, he published his first scientific paper, in 1934. He also sent a letter to the editor for the Physical Review scient journal. This letter was noticed by Professor Rabi, who worked at Columbia University. He suggested that Schwinger transfer to his school.

Julian Schwinger soon did transfer to Columbia University. Here, he continued to work on his bachelor's degree in physics, which he earned in 1936 from this school. Soon after finishing his degree, he published another paper, Magnetic Scattering of Neutrons. He later submitted this same paper for his dissertation. However, because he had not finished all of the classes required to earn a Ph.D., he did not earn the degree right away. He went on to finish the necessary classes, and finally earned his degree in 1939.

After earning his Ph.D., Julian Schwinger began working at the University of California, Berkeley, as a National Research Council Fellow. While here, he focused on physics research. He also worked closely with another famous scientist, J. Robert Oppenheimer. In 1941, he began working as an instructor at Purdue University. Here, he taught physics. Within a year, he was promoted from instructor to assistant professor. While working here, he also continued his research. However, he did not research at Purdue, but instead at the Massachusetts Institute of Technology (MIT). He later joined the radiation program at MIT in 1942.

In 1943, Julian Schwinger earned a job offer to join the Manhattan Project. This was (at the time) a secret group of scientists who were working together to build the two atom bombs that would later be dropped on Japan. Schwinger refused to join this project. Instead, he worked in the radiation lab at MIT. While working in the radiation lab, he formulated some new theories. One of these theories is the theory of nuclear scattering. This theory went on to be used in nuclear physics. He often talked about this theory, and many others, in his lectures. His lectures were so in depth that they were recorded and later published into a book: Discontinuities in Waveguides.

In 1945, Julian Schwinger left Purdue University and began working at Harvard University. He started working as an associate professor but was promoted to be a full professor in 1947. While here, he continued his research and formed several theories, including the theory of renormalization, as well as various theories within the field of quantum physics. He would later become most famous for working in this field.  He left Harvard in 1972.

In 1972, he began working at the University of California, Los Angeles. Here, he worked on one of his most recent theories: source theory. This theory was not universally agreed on within the scientific community, which was part of the reason why he was working on it so much. He continued to work at this university until his death.

Near the end of his career, he focused on writing scientific papers. Of course, he had been writing them throughout his career, but he focused on them more then. He wrote over 200 papers during his career. He also wrote many books. Some of his most famous books are listed below.

All of Schwinger’s awards are due to his work to advance science. Some of his most prestigious awards are listed below.

Julian Schwinger earned honorary degrees from both Purdue University and Harvard University during his lifetime.

Julian Schwinger married Clarice Carrol in 1947. Clarice would work closely with her husband at times, editing some of his books. This couple was married until Schwinger’s death.

Near the end of his life, Julian Schwinger was diagnosed with pancreatic cancer. This cancer reduced his quality of health greatly, and would later cause his death. Julian Schwinger died on July 16, 1994, in Los Angeles, California, USA. He was 76 years old when he passed away.