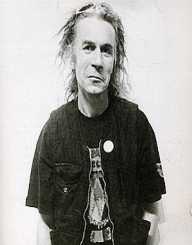 Jamie Reid is a British musician and artist whose influence went beyond his rock music in the 1970s.

Jamie Reid was born in 1947 in the Croydon district of London, England. He was brought up in Croydon in a politically sensitive family. Reid went to John Ruskin Grammar school. He enrolled at Wimbledon Art College. After that, he joined Croydon Art College.

In 1970 he left Croydon for central London. He became a member of the Situationalist International Movement. This was a leftist political group with its headquarters in France. Its members advocated for the implementation of the Marxist ideology in the equalization of injustices in the society. The movement believed in a classless society. In Britain, the movement members were known as Anarchists. He became an editor of an anarchist publication Suburban Press. He managed to capture the attention of his readers by the bizarre form of artwork. Instead of the conventional photographic imagery, Reid grafted several pieces into a mosaic to convey his message. He edited the magazine until 1975.

Eventually, he left the city and went to the Isle of Lewis. In 1976, his erstwhile friend from college called him. Malcolm McLaren persuaded him to return back to London. Reid joined his friend’s musical band called The Sex Pistols. This youthful rock and punk outfit rearranged the British rock music scene with its new rendition of playing and advocacy. Reid was not a gifted musician, but his artistry helped the group soar high. He pieced up the group’s maiden album cover graphics. The initial album was titled Never Mind the Bullocks, Here’s the Sex Pistols. Despite its initial success, the band never did other studio album recordings.

Reid contributed in the writing of Anarchy in the UK. This song was well received in the music charts of British society. In this single, he came up with the cover sketch of the British Queen Elizabeth II. She had a napkin safety pin on her nose and swastika symbols on her eyes. Like before, his artistic style confused many but the song spoke about the discrimination and class caste society in Britain.

Reid was known for his artistic prowess than music. His contribution to the rise of The Sex Pistols was mainly due to his cover graphics on their album and singles. Apart from the musical graphics, he made other political and environmental contributions. In 1978, he started production of politically inspired paintings. He used some of his work to protest injustices like racism and marginalization of the poor in the society. The most notable is his production Liberty Red and Liberty Black. In these defaced paintings, he advocated for the upholding of human rights and civil liberties in the British society. His political beliefs prompted him to organize various protests. Reid led protests in Scotland over the Community Charge Tax. In the larger Great Britain, he led protests over the introduction of Clause 28 in the Local Government Act in 1988, and the Criminal Justice Bill.

He also used God Save Our Forests a portrait that advocated for the conservation of our forests. Reid has focused his other works on issues concerning climate change, economic instability, and disarmament. Some celebrities like Madonna Angelina Jolie are his most ardent clients. The celebrities help his cause to channel our energy to something more useful to society.

In his seventies now, Reid is still an anarchist. He still offers his opinion to the society on how to fight injustice and create an environment envisaged by the Karl Marx theory.

Jamie Reid has a daughter called Rowan by his former girlfriend, British actress Margi Clarke. He still works and resides from his home in London.

Reid is considered the unorthodox artist. He has a way of passing a message and still creates suspense in his audience. He uses humor and sadistic effects on most of his work to portray different emotions.

Some of his paintings are the most sought after in gallery exhibitions around the world. His work is on display in art museum houses in London, and New York.

He did his paintings in the 1970s as a statement of ideology. Today, most of the young people in the UK and US wear his sketches on their jeans trousers as a symbol of fashion. Upcoming rock bands are embracing his kind of activism in their outfit display. His work has transcended the generational divide.