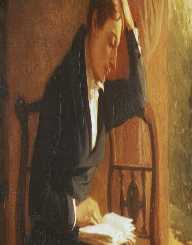 English poet John Keats was born on the 31 October 1795 in London, England to Edward Keats and Frances Jenning. At the time of his birth, the family was living at the Swan and Hoop Inn & Stables, 24 Moorefield Pavement Row on London Wall. Keats’s maternal grandfather owned the business, and Edward and Frances Keats ran it. John was their first born child and the two other sons, George Keats (b.1797) and Tom (1799) and a daughter Frances (1803).

Keats’s both died when Keats was young. In 1804, his father died as a result of a fall from a horse. His mother remarried, but it was not a success and resulted in financial problems which impacted on Keats's life. His mother died in of tuberculosis in 1810 and, in her will, appointed Richard Abbey and John Rowland Sandell as guardians of her children. For four years the family lived with their maternal grandmother, but when she died in 1814, the children were split up. Frances went to live with one of their guardians, and the three boys went into lodgings together.

Keats was educated at John Clarke’s School, Enfield, a boarding school. He became friends with the son of the headmaster Charles Cowden Clarke, and they remained friends until his death. Clarke, who would later be a Shakespearean scholar and critic, encouraged Keats’s literary ambition.

When he was fifteen, Keats’s guardian Abbey, removed him from school and arranged an apothecary-surgeon apprenticeship with a Dr. Hammond of Enfield. Keats was licensed as an apothecary in 1816, but he had already decided he wanted to be a poet. Many scoffed at a middle-class young man with no higher education becoming a poet, but Keats’s persisted.

Keats wrote his first poems in 1814: Imitation of Spenser, On Peace and Fill For Me A Brimming Bowl while still doing his apprenticeship and in 1815 he registered at Guy's Hospital in London for further training. Around this time he was introduced to the painter Joseph Severn as well as William Haslam. When still working at Guy’s Hospital in 1816 his first poem is published. O Solitude appeared in The Examiner on the 5 May. Leigh Hunt was the editor of the literary publication. In July Keats passed his exams and became a licensed practitioner.

During 1816 Keats youngest brother Tom was showing signs of early tuberculosis, and the brothers went on holiday to rest. Keats’s wrote many letters, and some of these were published posthumously. After the break, he returned to his medical career. That October he wrote, On First Looking into Chapman’s Homer. Keats started meeting influential people in the literary world including the poet Shelley and Leigh Hunt.

On First Looking Into Chapman’s Homer (1816) was by Leigh Hunt published in The Examiner in an essay entitled Young Poets. At the end of 1816, Keats gave up medicine.

In 1817 C and J Ollier published Keats’s first volume of poetry Poems. Sales were disappointing. By this stage, Keats had met John Taylor, and he changed publishers to Taylor and Hessey.

Early in 1817, after seeing the Elgin Marbles in the British Museum, he wrote two sonnets. In the Spring of 1817, Keats went on a tour through England. He started working on Endymion and also wrote On The Sea while visiting the Isle of Wight. The solitude of his journey affected him profoundly. During his travels, Keats also met Benjamin Bailey, and in September of that year, he visited Bailey at his home in Oxford while continuing to work on Endymion. He returned to London in October of 1817 to where he was living with his brothers. By December 1917, he had finished Endymion which was published in 1818 by Taylor & Hessey. Critics attacked the work.

The same year Keats was introduced to William Wordsworth and Charles Lamb.

During 1818 George Keats immigrated to America with his wife. (He would go on to have a family and many descendants in the United States). In the summer of 1818, John Keats toured the Lake District and Scotland with Charles Brown. Returning home, he nursed his sick brother Tom who died in December 1818. Keats then moved to Wentworth Place and got to know the Brawne family, forming a relationship with their daughter Fanny.

Throughout 1919 Keats continued to write poetry and despite his depression produced some of his most famous works including The Eve of St Agnes, The Eve of St Mark, La Belle Dame Sans Merci, Lamia, Otho the Great and worked on The Fall of Hyperion.

In 1820, John Keats published Lamia, Isabella, The Eve of St Agnes and Other Poems. Three of his most famous odes were included: Ode to a Nightingale, Ode on a Grecian Urn and Ode on Melancholy.

In early 1820 Keats started showing signs of tuberculosis, and by mid-year, he was extremely ill. Initially, Fanny Brawne nursed him, but in September, Keats moved to Italy with his friend the painter Joseph Severn who stayed with him until his death in Rome on the 23 February 1821.

Poems (1817), Endymion: A Poetic Romance (1819) and Lamia, Isabella, The Eve of St Agnes, and Other Poems (1820) were published in his lifetime. In 1831 his poems appeared in Collections: The Poetical Works of Coleridge, Shelley, and Keats. Other publications include Letters of John Keats: A New Selection (1970), The Letters of John Keats (1958) and Life, Letters, and Literary Remains of John Keats (1848).