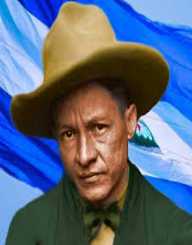 Cesar Augusto Sandino was a revolutionary figure and national icon in Nicaragua. His war of liberation of Nicaragua against the military occupation by the Americans is still a subject of pride across Latin America.

He was born Augusto Calderon Sandino in the town of Niquinohomo on the 18th day of May 1895. His father Gregorio Sandino was a well-known businessman and landlord in the area. While his mother Margarita Calderon was the domestic servant of Sandino. Fearing ridicule from the community, Gregorio never acknowledged his parental responsibility. Thus Augusto Sandino was raised by his mother.

It was until 1904 when Gregorio took the boy to stay at his house. Even then, he never approved of him as his son. Augusto Sandino was educated in a local elementary school and went to a senior school in Granada.

During his time, the Americans had a heavy military presence in Nicaragua. This dented the pride of most Nicaraguans who felt exploited by the foreign power aided by the repressive Nicaraguan government. An attempt by a section of the army to depose the president was brutally crushed by the US army in 1912. This was his first encounter with the reality of the military presence of the American army.

Cesar Augusto Sandino was an explosive person in nature. Once in 1921, he tried to kill the son of an influential local political figure. Fearing his death, Sandino fled into exile. He escaped to Mexico through Honduras and Guatemala, where he got hired with an oil producing company.

As a clerk at the Standard Oil refinery, Cesar Augusto Sandino interacted with views of the Mexican revolutionists. He greatly admired the zeal and patriotism the Mexicans exuded. When accosted by his Mexican friends, Sandino formulated his version of anti-imperialism. He returned home in 1925 and got employed in a mining company near the border with Honduras.

In 1926, General Jose Maria Moncada led a revolt against the Adolfo Diaz, the American backed president of Nicaragua. Cesar Augusto Sandino seized the opportunity. He led his small army to join forces with Moncada. Moncada welcomed him with a cold heart. He sought help from other comrades in the Liberal army movement. Fortunately, some generals within the Liberal movement welcomed him in.

The following year, Cesar Augusto Sandino staged a successful attack on the government soldiers from his base in the Segovia Mountains. This cemented his reputations as a military commander. As part of the larger Liberal Movement which was sympathetic to exiled vice president Juan Bautista Sacasa, Sandino was now getting funds from Mexico. In an epic battle in Managua, the Liberal army led by Moncada defeated the government forces in the city. Moncada’s victory was halted by the intervention of the American troops.

A cease-fire agreement followed the US-sponsored talks between the government and the Liberal forces. In the Espino Negro Accord, both sides were to disarm and integrate into a common national army. Cesar Augusto Sandino never ratified the treaty. He retreated to mountains and waged his war on the foreign power. The newly formed National army under Moncada sent for his capture. Surprisingly, Sandino’s forces thwarted the mission.

When Moncada became president of Nicaragua in 1928, Cesar Augusto Sandino used the opportunity to prove his point. He continued to discredit the new president as a traitor. His cause attracted funding from the Soviets. Tides turned to his favor from 1931. With the government resources channeled to help the victims of the earthquake in Nicaragua, nothing much was left to sustain the war. In the US, the Great Depression was at its devastating peak. This forced the Americans to leave Nicaragua and most of Latin America.

In 1933, former vice president Juan Bautista Sacasa became the new president of Nicaragua. After series of meetings with the president, Cesar Augusto Sandino declared his fighters would disarm if the National Guard was disbanded. The new commander of the National Guard Anastasio Somoza Garcia ordered for Sandino’s elimination.

It was on February 21, 1934, that Cesar Augusto Sandino was executed. His delegation was captured after leaving the presidential palace. Sandino, his brother and his two commanders were later executed and buried. He was survived by his wife, Blanca Arauz. The airport in the capital city was named in his honor. A political party in Nicaragua has his name.