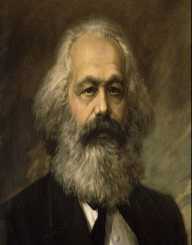 Karl Max was born on May 5, 1818, in Trier, a town of the Province of the Lower Rhine, Kingdom of Prussia. His father Herschel was a lawyer, which allowed the family to live a wealthy middle-class life. His family also owned some Moselle vineyards. His father had Jewish roots, and to escape anti-Semitic constraints, he converted to Lutheranism.

His father was not religious and was interested in the ideas of Kant and Voltaire. In 1819, the family moved to Porta Nigra. His mother Henriette came from a business family and later founded the Phillips Electronics company.

Karl Max was the third of nine children, and after his brother’s death in 1819, became the eldest son. He was baptized into the Lutheran Church in 1824. His father educated him, and in 1830 entered the Trier High School. The headmaster of the school, Hugo Wyttenbach was a liberal and friend of his father’s. He often angered the local government by employing liberal humanists as teachers. Subsequently, the school was raided in 1832, and it was discovered that liberal materials were distributed amongst students. After this, several prominent reforms were made at the school.

In 1835, Karl Max went to University of Bonn, wishing to study philosophy and literature. Due to his poor health, he was excused from military service. At the university, he joined the Poet’s Club, which contained several political radicals. He was also a member and later co-president of Trier Tavern Club drinking society. His grades were at first good, but then deteriorated, and his father transferred him to the University of Berlin.

After spending a summer in Trier, Karl Max became serious about his life and education. Marx got engaged to Jenny von Westphalen- a baroness of the Prussian ruling class. The couple married in 1843. At the University of Berlin, he studied law but also continued to study philosophy. He became known with the work of German philosopher G.W.F. Hegel.

He also joined the Doctor’s club, which discussed the Hegelian ideas and became involved with radical thinker’s group The Young Hegelians. The group adopted his dialectical method and criticized the traditional society, politics, and religion. During this time, he was also writing fiction and non-fiction. In 1837 he wrote the novel Scorpion and Felix and the drama Oulanem. He also dedicated several love poems to his fiancé Jenny.

Marx soon dropped writing and focused on several other projects, like the translation of Latin classics and editing of Hegel’s Philosophy of Religion. He wrote his doctoral thesis The Difference Between the Democritean and Epicurean Philosophy of Nature in 1941 and was awarded Ph.D. from University of Jena.

Karl Max was considering to pursue an academic career. However, at the time there was growing opposition to the classical liberalism and the Young Hegelians. In 1842, Marx moved to Cologne and became a journalist for Rheinische Zeitung. Prussian government censors soon attacked the newspaper, and in 1843, after an article criticizing the Russian monarchy, Tsar Nicholas I requested the publication to be banned. After this, Marx moved to Paris.

In 1843, Paris was the political capital of Europe. There, Karl Max, together with Arnold Ruge, founded the journal German-French Annals. The pair published one issue of the journal when their philosophical differences led to the demise of the journal. In 1844, this experience prompted Marx to meet Friedrich Engels, who became his collaborator and close friend. They began work on criticizing philosophy of a Young Hegelian Bruno Bauer. Their first collaborative work, The Holy Family, was published in 1845.

Later in 1845, Marx moved to Belgium, after he was expelled from France for his radical writing in another newspaper. The newspaper Vorwarts! has strong ties to the organization that later became the Communist League. In Brussels, Marx continued the growth of his ideology and completely broke off from the philosophy of Young Hegelians. During this time, Marx wrote The German Ideology- the work, which made first steps into his theory of historical materialism. This work was not published during his lifetime.

Karl Max wanted to link all the socialists around Europe and founded the Communist Correspondence Committee in 1846 to serve his purpose. In 1847, socialist of England held a conference and found the Communist League. Marx and Engels were invited to write the Manifesto of the Communist Party.

The Communist Manifesto became his most known work and was published in 1848. The following year, Marx was expelled from Belgium, and since Prussia refused to renaturalize him, Marx moved to London. He did not receive British citizenship but remained there until his death.

In London, Karl Max helped to found the headquarters of the Communist League, known as the German Worker’s Educational Society. He also continued to work as a journalist in London, and correspondent for New York Daily Tribune from 1852 to 1862. Despite his hard work, Marx was not able to earn a living and was supported by Engels. In 1867, he published the first volume of Das Kapital.

Marx spent the rest of his life writing and revising manuscripts for further volumes, but never completed them. After his death, Engels gathered his materials and released two more volumes.

Karl Max and his wife Jenny von Westphalen had seven children, but only three survived to adulthood. For his writing, Marx often used pen names to avoid authorities tracking him down.

Marx had poor health, often suffering from attacks of headaches, eye inflammation, and neuralgia. An unsuitable lifestyle further exacerbated his symptoms. In 1877, his health status worsened, and he was suffering from constant insomnia. His mental condition was also changing, Marx being aggressive, insulting and rude.

Historians believe that he suffered from a hereditary liver disease, eye inflammation from working at night and eruption of carbuncles due to his use of tobacco, alcohol and poor diet. His wife died in 1881, and afterward, Marx developed catarrh, which kept him ill. He got sick with bronchitis and pleurisy and died on March 14, 1883.