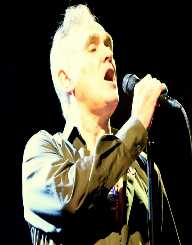 Morrissey is the world-famous lead singer of the band The Smiths. He also has had a successful solo career, known for super hit albums like Viva Hate. He is also known for openly criticizing other celebrities both on and off stage. In 2006, he was voted the second greatest living British icon.

Morrissey was born on May 22, 1959, in Davyhulme, Manchester, United Kingdom. His full name is Stephen Patrick Morrissey, though, he is famously known as just Morrissey. His father Peter was a hospital porter, and his mother Elizabeth was an assistant librarian.

As a teenager, Morrissey had a difficult life, because of the chronic depression that he was suffering from. Hailing from a modest background, he found a cure for his depression in the form of Pop Music. It relieved his mental pain, and he also wrote poetry to distract himself. Becoming more interested in music, he felt the urge to create music of his own and started his first band The Nosebleeds.

As a member of The Nosebleeds, Morrissey had moderate success at best, and in 1982, he got serious about making music and formed The Smiths. The Smiths released their first single Hand in Glove which became hugely popular with the frustrated youth of his period.

Morrissey made sure to connect with his fans during the band’s performances. He would often use rough language, and go on to criticize other famous bands and artists. This made him a hit. His controversial comments became widely popular and brought him much attention from fans and celebrities alike.

The Smiths released four singles before breaking apart, all of which reached the Top 5 in the charts.  Their released titles include – Meat is Murder (1985), The Queen is Dead (1986), Strangeways, Here we come (1987) and Rank (1988). The latter two were released after the band parted ways.

Morrissey has enjoyed a successful solo career after the dissolution of The Smiths. His 1988 album Viva Hate, was extremely popular and got him a new fan base. He has also released another album Vauxhall and I in 1994.

In 1997, Morrissey released the album Maladjusted. The following year, he took a break from making music. He recorded no new material till 2003.
After making his comeback in 2004, he released the album. You are the Quarry. In 2006, this was followed by another hit album Ringleader of the Tormentors. Three years later, Morrissey came up with Years of Refusal. His latest album World Peace is None of Your Business came out in 2014.

Morrissey maintains an extremely private personal life. His sexual orientation has been a matter of debate for quite some time, and media speculations have tended to portray him as a gay man. He was also rumored to have been in a relationship with Jake Walters.
Morrissey is vegan and is an animal rights activist.