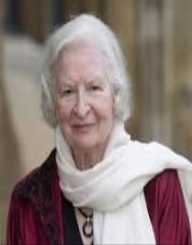 Phylis Dorothy James was born on August 3, 1920, in Oxford, England. She was a famous English writer by the name P.D James known for her series of novels which featured fictional detective Adam Dalgliesh. She was also the author of other fiction novels including ‘Death Comes to Pemberley’ and ‘Children of Men.’  She was also known as The Right Honorable ‘The Baroness James of Holland Park’. She died on November 27, 2014, at the age of ninety four.

P.D James was born Phylis Dorothy James in Oxford, England on August 3, 1920. She went to British School at Ludlow for her primary years and later joined Cambridge High School for Girls. At the age of sixteen, she was forced to drop out of school due to lack of sufficient funds and her father was also reluctant in furthering her education.

She started working in a tax office for three years before finding another job serving as an assistant stage manager for a particular theatre group. She later studied hospital administration and served at a hospital board in London from 1949 to 1968.

In the 1950s, P.D James began her literary work starting with her first detective novel titled ‘Cover Her Face.’ In her novel, she created a fictional character known as Adam Dalgliesh of New Scotland Yard whom she featured as an investigator and a poet. She published the book in 1962 bearing the name P.D James.

Two years after her first work she served at the criminal section of the Home Office as a civil servant where she worked before retiring in 1979. In 1991, she became Baroness James of Holland Park and was a member in the House of Lords serving as a Conservative. She also served as patron of the Prayer Book Society.

She also wrote ‘The Private Patient’ in 2008 which unfolds the events at a private plastic surgery clinic in a secluded manor house belonging to an English community. Apart from Adam Dalgliesh as her mystery fiction character, she created another fictional detective known as Cordelia Gray whom she represented in her two novels titled ‘An Unsuitable Job for a Woman’ (1972) and ‘The Skull Beneath the Skin’ (1982).

P.D James received numerous awards and honors including Office of the Order of the British Empire in 1983, Associate Fellow of Downing College, Cambridge (1986), Fellow of the Royal Society of Literature, President of the Society of Authors (1997-2005), honorary doctorate from University of Buckingham (1992), honorary doctorate from University of Glasgow (1995), honorary fellowship at St Hilda’s College, Oxford (1996).

P.D James was married to an army doctor known as Ernest Connor Bantry White in 1941 and together had two daughters Clare and Jane. Ernest died in 1964 after experiencing a mental illness and spending time in a psychiatric institution. She died on November 27, 2014, in Oxford, England at the age of ninety four.