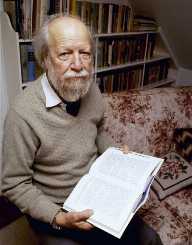 William Golding was born on the 19 September 1911 in Newquay, Cornwall, England. His parents were Alex and Mildred Golding. William Golding grew up in Marlborough, Wiltshire. His father was a science teacher at the famous Marlborough Grammar School; which became one of the first great English public schools to accept female pupils. Mildred Golding was a political activist who fought for women’s rights in the early days of the feminist movement in the UK.

William Golding’s early education took place at Marlborough Grammar School. His biographer writes about how Golding was bullied during his school years. At Oxford University, William Golding started out studying science but changed courses to study English literature. He graduated with a BA Second Class Honours in 1934.

After graduating, William Golding taught at Bishop Wordsworth’s School in Salisbury Wiltshire (1945-1961). Golding had been working on his novel Lord of the Flies. When he felt it was ready for publication in the early 1950s, he had difficulty finding a publisher. At first, Faber & Faber rejected it outright, but after editor Charles Monteith saw the manuscript, it was finally published in 1954. Lord of the Flies was a financial success, and this meant that William Golding could leave his teaching job. He resigned in 1961 and took up an offer as a writer-in-residence at a college in Virginia in the United States where he spent the academic year.

William Golding went on to publish twelve novels including his trilogy To The Ends of The Earth: Rites of Passage (1980), Close Quarters (1987) and Fire Down Below (1989). When he died suddenly, he left a draft manuscript, and this was published posthumously as The Double Tongue (1995).

Lord of the Flies is William Golding’s most famous and widely read and researched work. Another renowned novel is Rites of Passage, for which he won the Man Booker Prize.

William Golding won the James Tait Memorial Prize (1979). He was awarded the Man Booker Prize (1980) for Rites of Passage. Then in 1983, he won the Nobel Prize for Literature. He was awarded this for his ability to illuminate the human condition. Queen Elizabeth II knighted him in 1988.

The Times of London ranked Golding number three on their list of The 50 Greatest British Writers Post 1945.

William Golding and Ann Brookfield were married in September 1939 just after the outbreak of World War II.
They had to two children together, daughter Judith and a son David. Judith has written a memoir about growing up with William Golding as a father.

William Golding was in the Royal Navy during World War II. He was involved in the sinking of the famous German ship the Bismarck. He has also involved the D-Day Normandy invasion.

Later in life, William Golding purchased Tullimaar House in Cornwall and lived there with his wife Ann until he died in June 1993 of heart failure. Tullimaar House is still in the Golding family and is occasionally opened to the public. In 2014, on the 60th anniversary of the publication of Lord of the Flies, his family presented Golding’s archive to the University of Exeter on a long-term long. This archive includes a handwritten draft of Lord of the Flies.

Professor of English Literature at Oxford University, John Carey, was given access to Golding’s papers and produced the to date, the only biography.

William Golding wrote twelve novels, including the famous Lord of the Flies. A prolific writer, he also penned plays, essays, short stories, poems, and reviews. He left voluminous journals dating from 1971 through to 1993.