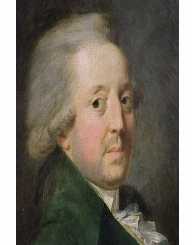 Joseph Fourier was one of the most eminent mathematicians of the 18th century. Unlike Lavoisier, who had the misfortune of getting guillotined, luck shined on Fourier, who was saved from being killed. He went on to make many discoveries in the field of mathematics and science, such as the greenhouse effect and the Fourier transforms which are still so relevant that they are taught in universities all over the world.

Joseph Fourier was born as Jean Baptiste Joseph Fourier on March 21, 1768, into a low-income family. He was French by birth. He lost his father at an early age of 10 but was able to continue his studies due to his extreme dedication, hard work and sincere interest in learning. His father who was a tailor produced 12 children with his mother, of whom Fourier was the ninth-born. He also had three step-siblings from his father’s previous marriage.

At the age of 12, Joseph Fourier was admitted into the Ecole Royale Militaire which was run by Benedict Monks. He dedicated all his energy to learning and had finished several huge volumes on mathematics within a few years.

Joseph Fourier was a mathematician of outstanding calibre. Even though he was rejected a position in the scientific corps due to his humble origins, he continued his research and studies with great passion. He is most well-known for the Fourier transforms which have broad applications in the field of heat transfer and vibrations.

Joseph Fourier began as a teacher in the same institution where he was educated. This was not a good period for researchers and scholars in France as the country’s military believed them to be expendable. They wanted soldiers, not scholars. Fourier started having political thoughts during this period which was nearly fatal for him. He joined the local Revolutionary Committee during the Reign of Terror. He was caught, imprisoned and was destined to be guillotined.

By sheer luck, Joseph Fourier narrowly escaped this gruesome fate when Maximilian Robespierre, the prime supporter of the Reign of Terror was guillotined himself and the country returned to more normal proceedings. Both France and the world were saved from the loss of another talented scientist.

Joseph Fourier joined the Ecole Polytechnique after his release as a teacher and later succeeded Lagrange to the chair of analysis and mechanics. In 1798, Napoleon took him along with other scholars to Egypt. Over the course of next four years, Fourier collected and researched a substantial amount of scientific work. However, Napoleon was keen on making him a politician. Fourier was appointed the Prefect of the Isere department, a work he did not like, but feared to invoke Napoleon’s wrath upon himself. He held this position until the defeat of Napoleon.

Joseph Fourier was free to pursue academics once again after the fall of Napoleon in 1815. He went back to Paris and became the Director of the Statistical Bureau of the Seine. In the early 1820s, he worked extensively on heat transfer and developed a system what is today known as the Fourier Transform. His work is still relevant today.

Fourier also discovered that the incoming solar radiation is not the only cause of earth’s temperature and proposed that the atmosphere acts as an insulator. This was later known as the Greenhouse effect.

Napoleon recognised Fourier’s scholarly talents and made him a Baron in 1809.

Fourier was made a foreign member of the Royal Swedish Academy of Science, in the final year of his life.

While in Egypt, Joseph Fourier developed a severe heart condition that troubled him for the rest of his life. He would often suffocate, and on May 4, 1830, he fell from the stairs. Twelve days later, he passed away on May 16, 1830. He was 62.

It is undeniable that Joseph Fourier was one of the most influential mathematicians of the 18th Century. An avid researcher, his work has become the cornerstone for some of the significant discoveries in the modern times, especially the Greenhouse effect and the Fourier Transforms. While the French mercilessly guillotined many great scholars, it was our luck to be blessed with Fourier’s contributions to mathematics.