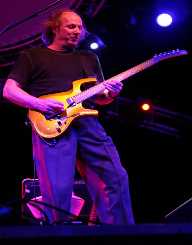 Rock guitarist, singer and multi-instrumentalist Adrian Belew was born Stephen Belew in Covington, Kentucky in the United States on the 23 December 1949.

Adrian Belew showed musical talent as a child and started singing at a young age. He was also a drummer in his high school’s marching band and taught himself to play the guitar, developing a unique style. Later he joined The Denems as a drummer and singer. He moved to Nashville in 1977, playing in a cover band, the Sweethearts. Frank Zappa heard him play and eventually, Belew toured with Zappa.

Adrian Belew also appeared on the Zappa album Sheik Yerbouti as well as the concert film Baby Snakes. David Bowie saw Belew performing with Zappa in 1978, and this resulted in Belew doing a world tour with Bowie on his Isolar II tour. Belew went on to play on Bowie’s albums Stage and Lodger.

Adrian Belew toured with Talking Heads in 1979 and played on Remain in Light (1980). He also played with the Tom Tom Club 1981 and co-wrote their hit Genius of Love which featured on their album Tom Tom Club.

His first solo album Lone Rhino came out in 1982 with the follow-up Twang Bar King released in 1983. The same year, he produced The Raisins album and played on Mister Heartbreak with Laurie Anderson. In 1984, he was working with The Elvis Brothers. The Raisins name was changed to The Bears in 1985 and Belew joined them as a band member on their US Tour. The same year he appeared with Laurie Anderson in the video Home of the Brave as well as on Paul Simon’s Graceland album. Adrian Belew continued working and touring with The Bears during the 1980s. The decade closed with Belew releasing Mr. Music Head. Belew’s daughter appeared alongside him in the video Oh Daddy.

In the 1990s he recorded a duet with David Bowie in 1990, Pretty Pink Rose who appeared on his fifth solo album, Young Lions. He was Bowie’s musical director on the Sound+Vision Tour (1990) as well as a band member. His last album with Atlantic was Inner Revolution in 1992. In 1993 he appeared on The Beatles tribute album Come Together, performing Blackbird.

Over the years he has continued recording on his own and with others including Bela Fleck and Nine Inch Nails and touring with The Bears. In 2017 he was on the Adrian Belew Power Trio Tour.

In 2001 Belew was presented with the CAMM Lifetime Achievement Award.

Adrian Belew wrote the musical score for Pixar’s short film Piper which won an Academy Award for Best Animated Short Film in 2017. He later said that scoring the Oscar-winning movie was one of the highest honors of his life.