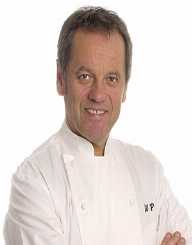 Wolfgang Puck was born on July 8th, 1949. His place of birth was in St. Veit, Austria. Puck is a restaurateur by profession, and he is famous for his delicious meals and the high-end restaurants that he owns. His successful career began after opening up Spago- which was his first restaurant in 1982. Soon after the success of this restaurant, he took advantage of its success and opened up other branches in the United States. In addition to being successful in the kitchen, Puck has written cookbooks and also featured in the film industry by acting in Wolfgang Puck.

Wolfgang Puck was the son of Josef Puck, adoptive father, and his mother, Maria. His paternal father was a butcher while his mother worked as a restaurant chef. Puck’s paternal father left them while he was still young. This left his mother raising him right from the time he was a toddler. Soon, Maria got married again to a coal miner named Josef Puck. He became the adoptive father to Wolfgang and therefore gave him his name ‘Puck.’ As a result of this marriage, Puck’s mother gave birth to three other siblings thus making Puck the eldest brother of them all.

The influence of being raised by his mother gave Puck the immediate passion of being a chef in future. Right from a tender age, he had begun preparing meals and aspired to be a professional chef in future.

In 1982, Wolfgang Puck ventured into the restaurant business by establishing Spago. The name ‘Spago’ is Italian slang which stands for spaghetti. This was a restaurant with a difference as it brought together the French cooking culture as well as California ingredients. The restaurant was uniquely located at the center of Hollywood's Sunset Strip. This, therefore, attracted celebrities to the newly opened restaurant. With a new style of cooking and a combination of different ingredients, Puck’s meals including Pizza were simply out of the ordinary. This largely contributed to his early success in the restaurant business.

Puck did not waste time after the launch of his first restaurant. In 1983, he went big by launchingChinois, a Chinese restaurant. This was an extravagant restaurant that was internationally renowned for its Asian-type cuisine. The reviews from the surrounding community were also motivating.

The subsequent years were a major success to Puck as he kept on expanding his restaurant business. In 1989, he opened up Postrioin San Francisco. Two years later he followed this by launching another restaurant in 1991. This restaurant was called Granita.

Meanwhile, in the midst of expanding his restaurant empire, his first restaurant Spago was gaining popularity day by day. This made him move the restaurant to Cañon Drive, Beverly Hills. This was a more elegant setting that would earn him the kind of customers he desired for the place.