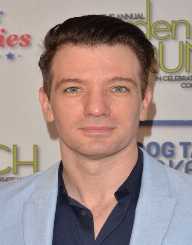 Joshua Scott "JC" Chasez is an American singer, songwriter, and a dancer. Born on August 8, 1976, he is also a record producer and actor. JC Chasez, who started his music career with The Mickey Mouse Club rose to fame as a member of NSYNC which also had atop artist like Justin Timberlake. As a songwriter and producer, he has written and produced songs for bands and individuals likes of Girls Aloud, Mattew Morrison, David Archuleta and Basement Jaxx. Aside from music and productions, he was a judge for America’s Best Dance Crew.

JC Chasez was born in Bowie, Maryland but raised in Mennonite. He was adopted by Karen and Roy Chasez and had two other siblings Tyler and Heather. As a child, he liked to dance even though he was a shy person. Hel eventually got rid of his shyness as he began to sing. He had his education at the Robert Goddard Middle School and continued to Bowie High School.

JC Chasez was an excellent dancer while growing up, but very reserved. He only got into singing after building immunity to his shyness by partaking in a talent show. His friend bet him $20 bet to participate in that competition and as talented as he was, he won the competition. Through that, he was able to gain confidence and later took on to singing as his second passion.

His mother encouraged JC Chasez to audition for Disney’s The Mickey Mouse Club after spotting an ad in the Washington Post in 1989. He got auditioned and was picked onto the show until 1996. There he came into contact with Justin Timberlake and the two became close friends. He also met future stars like Christiana Aguilera, Britney Spears, Tony Luca, Ryan Gosling and Keri Russell.

The friendship between JC Chasez and Justin Timberlake led to the formation of the group NSYNC IN 1995. The two served as the lead singers and added two other members, Joey Fatone and Lance Bass. The group became very popular and projected their image into Europe. NSYNC self-titled debut album was released in 1998 in collaboration with other producers like Max Martin, Veit Renn, and Johnny Wright. The album became an instant hit selling about 15 million copies worldwide. It became very popular in the US and five other European countries, charting among the top 10. It spent three weeks at number two on the Billboard 200 chart and was 10× platinum in the US.

After enjoying their huge success, NSYNC was entangled with legal suits with their manager Lou Pearlman and parted ways with him. The band later signed to the Jive Records which released their second studio album No Strings Attached in 2010. The album followed suit the previous success becoming the fastest selling album of all time. In the space of a week, the album sold a record 2.4 million copies only to be broken in 2015 by Adele’s albums 25. The No String Attached album had some hit singles like It’s Gonna Be Me, Bye Bye Bye, This I Promise You.

The band also undertook the No String Attached Tour to promote which took them to most cities in North America. The tour sold about 70,000,000 tickets making it the highest in the North American region. Achieving that outstanding success, NSYNC kept their popularity intact with the release of the third studio album Celebrity in 2001. The album within the first week sold 1.8 million copies. It also chalked number one on the Billboard 200 and got good reviews from critics. The band later embarked on the Celebrity tour in 2002. The group has since gone on hiatus.

After NSYNC went on hiatus in 2002, JC Chasez went on to pursue a solo career as a singer, songwriter, and producer. His debut single was Blowin Me up (with Her Love) in 2002. The song was co-produced by Dallas Austin. He followed the single with his debut album Schizophrenic in 2004 released under Jive Records. It was co-produced by Dallas Austin, Basement Jaxx, and others. It received different reviews and made it to No. 17 on the US Billboard 200 chart. The album has since made sales of over 121,000 copies in the United States.

The release of JC Chasez' second album The Story of Kate was delayed because of his decision to leave Jive Records in 2007. Later, he was able to release the singles Until Yesterday, and You Ruined Me online. Justine Timberlake also helped with the production of some the songs on the album. As a songwriter, he has written songs for David Archuleta and Backstreet Boys among others. In 2008 to 2012, he was among the judges of the American’s Best Dance Crew. Chasez, Justin Timberlake and other NSYNC members performed at the MTV Awards in August 2013.

In 2016, JC Chasez alongside others like Topher Grace, Alona Tal, Anne Heche and Taye Diggs featured in the musical comedy Opening Night.

JC Chasez dated singer Tara Reid and is said to have also been involved with actress Eva Longoria.