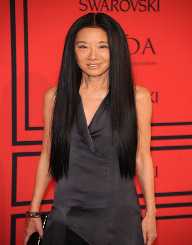 Vera Wang was born on June 27th, in 1949. She is a renowned American fashion designer. She is best appreciated for the haute couture wedding dress that she designed.

Vera Ellen Wang was born on June 27th, 1949. Her birthplace was in the New York City. Wang is of Chinese descent. She is the daughter of Florence Wu and Cheng Ching Wang. Both her parents were Chinese natives. Nonetheless, the migrated to the United States during the 1940s. Her mother worked with the United Nations as a translator. On the other hand, her father owned and ran a medicine organization.

Vera Wang went to the Chapin School where she graduated in 1967. After this, she went to France where she schooled at the University of Paris. She also enrolled with Sarah Lawrence College where she earned an art history degree.

After completing her art history degree from Sarah Lawrence College, Vera Wang earned an editing job with the Vogue magazine. She worked with the fashion and lifestyle magazine for about 17 years. After that, she went ahead and partnered with a celebrated fashion designer called Ralph Lauren. The two worked together for approximately two years. By the time Wang was 40, she had resigned from her place of work. She wanted to go and try her luck as a bridal wear designer on her own.

Vera Wang has also designed evening wear that was worn by the former first lady of the United States, Michelle Obama.

Apart from designing bridal dresses, Wang has earned fame for designing costumes to be worn by figure skaters. Some of these skaters that have used her costumed include Nathan Chen, Nancy Kerrigan, Evan Lysacek and Michelle Kwan.

Vera Wang tied the knot with Arthur Becker in 1989. The pair later adopted two daughters in their marriage. Unfortunately, their marriage ended in divorce in 2012.