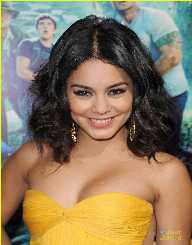 Vanessa Hudgens is an American actress who is best known for her leading role in the High School Musical trilogy.

Hudgens was born in Salinas, California on 14 December 1988. She moved with her family along the West Coast for her mother’s, Gina Guangco, work. Her father, Gregory Hudgens, was a firefighter. Hudgens and her sister, Stella, were raised Roman Catholic and attended Orange County High School of the Arts. Hudgens began acting in school at the age of eight. Hudgens’ and her sister were home-schooled after they began their acting careers.

Hudgens’ parents moved the family to Los Angeles to aid her acting career, and she started to appear in commercials. Hudgens made her television acting debut in 2002 making guest appearances on Still Standing and Robbery Homicide Division. Hudgens appeared in her first film, Thirteen, in 2003. Hudgens had a supporting role in the film, and it enjoyed critical success and a modest commercial showing. Hudgens followed this up by appearing in the flop film, Thunderbirds. Hudgens great breakthrough came in 2005 when she was cast as Gabriella Montez, the leading female role in the upcoming Disney musical, High School Musical. The film proved a massive hit by becoming the Disney Channel’s most-watched film ever, and Hudgens reached the top ten in the Billboard charts with the song Breaking Free, from the film. She dueted on Breaking Free with Zac Efron and the song reached number four in the Billboard charts.

Hudgens recorded a solo album following the success of High School Musical. The album was titled V, and it has sold over half a million copies since its release. In 2007, Hudgens appeared in the High School Musical sequel, High School Musical 2. The film debuted on the Disney Channel and was watched by over seventeen million people, smashing the previous record for a viewing audience by nearly ten million. Again Hudgens released a solo album, Identified, in the back of her film success. However, Identified, proved to be a commercial failure and Hudgens ended her relationship with the Hollywood Records label. Hudgens appeared in the third installment of the High School Musical franchise in 2008. High School Musical 3: Senior Year was the first of the trilogy to receive a theatrical release. It was a box office smash, it broke the record for takings by a musical on debut weekend and eventually earned a quarter of a million dollars.

Hudgens next acting role was in the commercially unsuccessful Bandslam. Hudgens was cast by Neil Patrick Harris in his stage production of Rent in 2010. In 2001, she worked with director Zack Snyder on the film Sucker Punch. Hudgens next box office success came in Journey 2: The Mysterious Island, which released in 2012 grossed 325 million dollars. 2013 saw shed her High School Musical image by appearing in the film Spring Breakers, which dealt with adult themes. In 2015, Hudgens starred in a Broadway production of Gigi.

Hudgens had a five-year relationship with High School Musical co-star Zac Efron. The pair’s relationship ended in 2010. Hudgens was fined a thousand dollars in 2016 for carving her name and that of a long-term boyfriend, Austin Butler in a rock at Coconino National Park. Hudgens was involved in two phone hacking scandals. In 2007 pictures of Hudgens posing nude were leaked on the internet. More naked photos were leaked online in 2009. Hudgens sued the website www.moejackson.com for posting the photos.

Hudgens was raised Catholic but is now a practicing non-denominational Christian.

Hudgens has worked with and raised money for Best Buddies International, a group that helps children with mental disabilities, and St. Jude Children’s Research Hospital.