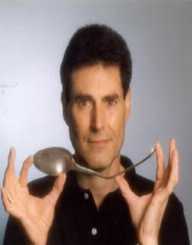 Uri Geller was born on December 20, 1946. He is an Israeli illusionist, magician and television personality. He is also a psychic as well. He gained popularity from claiming that he has supernatural psychic abilities. He mostly appeared in television shows being portrayed bending spoons and stopping watches. These acts that he performed made him famous to the general public. He was however criticized by skeptics for the acts that he performed claiming that he had supernatural powers by performing stage magic. He is also an author. He has written books of a supernatural nature and even his autobiography. He still appears in television shows showcasing his magic and psychic abilities.

Uri Geller was born on December 20, 1946, in Tel Aviv. At that time Tel Aviv was still a part of the British Mandate of Palestine. He was born to Itzhaak Uri Geller and Margaret Freud. His father is a retired army sergeant major. His parents were both Jewish. When he was eleven, his family moved to Nicosia, Cyprus. He attended the Terra Santa College for his high school education where he learnt English. At 18 he joined the Israeli Army’s Paratroopers Brigade. In 1967, he was injured during the Six Day War. From the year 1968 to 1969 he worked as a photographic model. He was also performing to small audiences in clubs. His performances made him famous to the public to some extent.

During the 1970s, Uri Geller started his career by appearing in television shows where he performed illusions such as bending spoons and stopping watches among other mysterious performances. He claimed that the things he performed he did due to his psychic abilities and telekinesis. He was criticized by a lot of skeptics and critics that thought that whatever he claimed was not practical.

Uri Geller gained recognition and popularity after being sued severally, and cases brought to court because of his acclaimed abilities. Another reason that suits were instituted against him was that he was presumed to be a fraud. In 1971, he was sued by a mechanical engineer who expected to see psychic abilities at his show rather than stage magic. The case was brought and argued in court, and the engineer won and was compensated the price of the ticket that he had bought as to watch Uri Geller's show. In 1974, Stanford Research Institute stated that there was some truth in what Uri claimed he had as psychic abilities. Uri’s skills were coined as the ‘Geller’s Effect.’

Uri Geller wrote an autobiography titled ‘My Story’ which is about his early life and his abilities. In his story, he claimed that he at times used stage magic in his performances in clubs to make his acts last longer than usual. He also published fifteen other more books that portrayed him as a psychic. His books contain fiction, nonfiction, and supernatural ideologies. He started using his psychic abilities to earn a living by helping mining companies get and spot areas where there was a possibility of the existence of minerals. He later went back to the television scene. He mostly appeared in reality television. In 2007, he hosted an Israeli reality television shown known as ‘The Successor.’ The show was dedicated to finding people with supernatural and psychic abilities. In the same year, he hosted ‘Phenomenon’ alongside illusionist Criss Angel.

Uri Geller was awarded the ‘Services to Promotion of Magic Award’ by the Berglas Foundation.

In 1979, Uri Geller married Hannah Shtrang with whom he has two children. Uri at times used his psychic powers to predict sports games which he predicted wrongly almost all the time. He has a net worth of $10 million.