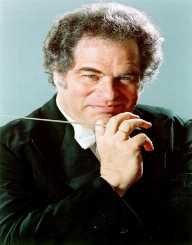 Itzhak Perlman is a multi-award winning Israeli-American conductor, classical musician, conductor, and music teacher. Born on August 31, 1945, he was a child prodigy, who showed great talent on the violin at a very young age, developed the skill and became a world icon. Perlman performed in the White House at a State Dinner honouring Queen Elizabeth in 2007and at the 2009 inauguration of President Barrack Obama.

He has held performances throughout the United States and several parts of the world. As a conductor, he has conducted the Westchester Philharmonic and Detroit Symphony Orchestra. He received the Presidential Medal of Freedom in 2005.

Itzhak Perlman was born on August 31, 1945, in Tel Aviv, Israel(then in the British Mandate of Palestine). He was born to Poles Chaim and Shoshana Perlman. At the age of three, Perlman heard a classical music performance on the radio and since became attracted to the violin. To develop this interest, he was sent to the Shulamit Conservatory but was refused admission as he was too small hold a violin.

The rejection did not discourage young Perlman, and he self-taught on how to play the violin using a toy fiddle. At the age of four, Perlman developed polio and since used crutches but continued to pursue his music interests.

Itzhak Perlman enrolled at the Shulamit Conservatory and later at the Academy of Music in Tel Aviv. At the age of 10, he gave his first recital at the school. He continued his music studies at the Juilliard School in the United States under Ivan Galamian and Dorothy DeLay.

In 1958, Itzhak Perlman made a debut on The Ed Sullivan Show and appeared on it again alongside Rolling Stones in 1964. He would also make guest appearances on shows like Sesame Street and The Tonight Shows. In 1963, he made a debut at Carnegie Hall and the following year won the Leventritt Competition. This was followed by an intensive nationwide tour. Perlman would become a celebrated classical musician among his likes, holding several top concerts.

He also played with most of the world’s top philharmonic groups. In 1981, Perlman sang the role of "Un carceriere" ("a jailer") on the ENI recording of Giacomo Puccini’s Tosca featuring Renato Bruson, Renata Scotto, and Placido Domingo conducted by James Levine. He performed on the tribute by New York Philharmonic to the anniversary of the Statue of Liberty on July 5, 1986.

The following year, he joined the Israel Philharmonic Orchestra for a concert in Warsaw and Budapest and several other shows including in the Soviet Union. Perlman also performed with musicians like Yuri Temirkanov, Yo-Yo Ma, Jessye Norman, Pinchas Zukerman, and Isaac Stern.

Itzhak Perlman has played several notable shows for world figures. On May 7, 2007, he played at a state dinner in the White House attended by Queen Elizabeth II. Alongside others like Gabriela Montero, Yo-Yo Ma, and Anthony McGill, he performed John Williams’s Air and Simple Gifts at the inaugural ceremony of Barack Obama in 2009.

Itzhak Perlman accepted a teaching position at the Conservatory of Music at Brooklyn College in 1975. In 2003, he replaced his former teacher, Dorothy DeLay as the holder of the Dorothy Richard Starling Foundation Chair in Violin Studies at the Juilliard School. He also holds one-on-one classes for students at the Perlman Music Program on Long Island, NY.

Itzhak Perlman has received numerous awards and honours including several Grammy Awards like Best Classical Album in 1978 for Brahms: Concerto for Violin in D among several others. He also has several Emmy Awards. He received the Presidential Medal of Freedom from President Obama in 2015, National Medal of Arts from President Bill Clinton.