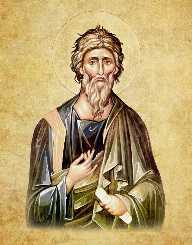 St. Andrew was one of the Twelve Apostles of Jesus Christ.

Andrew was born in 5 BC in a village near the Sea of Galilee. His father was Jonah and his brother was Simon Peter. He became a fisherman by trade.

St. Andrew is mentioned in all four of the canonical gospels. According to the Bible, Jesus first noticed him and his brother Peter while they were fishing. He then asked them to become his disciples. Andrew was one of the Twelve Apostles present during the Last Supper. After Jesus’ death, he started the mission to spread Christianity. He preached in Scythia, Thrace, Achaea, and along the Black Sea. In 38, he founded the episcopal see of Byzantium. He placed Stachys the Apostle as Bishop. The episcopal see of Byzantium later developed into the Patriarchate of Constantinople.

St. Andrew was martyred in the Greek city of Patras in the year 62. He was crucified on an X-shaped cross, which later became known as “Saint Andrew’s Cross”.

St. Andrew’s remains were initially buried in Patras. In 357, Roman emperor Constantius II transported them to the Church of the Holy Apostles in Constantinople. In 597, some of the relics were taken to Britain during the Augustine Mission. During the Sack of Constantinople in 1204, the Crusaders took the remaining relics to Italy. Over the next few centuries, different Church officials distributed the remains all over Europe. Currently, most of the relics are kept in the Basilica of Saint Andrew in Patras, Greece. Some are kept in the Amalfi Cathedral in Italy and in St Mary’s Roman Catholic Cathedral in Scotland. There are small parts of the relics located in France, Poland, and many other churches around the world.

The flag of Scotland and the Union Flag feature Saint Andrew’s cross. The cross is also featured on the Confederate flag and on the Alabama flag. The feast day of St Andrew is celebrated on November 30.

The Acts of Andrew is an apocryphal work describing the miracles performed by St Andrew. Traditions and legends regarding St Andrew are incorporated by churches in Georgia, Cyprus, Malta, Ukraine, Scotland, and several other countries.