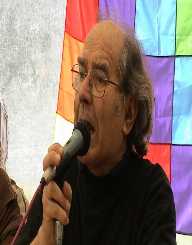 Adolfo Pérez Esquivel after spending 25 years in the educational sector resigned from his post in 1974. During his teaching career, Adolfo Pérez Esquivel also worked with a Latin-based American Christian pacifist in 1960. His resignation only came after Adolfo Pérez Esquivel was appointed the coordinator general for a network of Latin America-based communities aimed at promoting liberation of the poor with a nonviolent approach. After the March 1976 coup which saw the coming to power of the dictator General Jorge Videla, human right abuses brutalities became dominant. With this situation at hand, Adolfo Pérez Esquivel was instrumental in the bringing together and financing popular organizations to fight for the human rights of the citizens of Argentina. These organizations also supported the families of victims during the Dirty War.

His works and dedication were however recognized with honors like the Pope John XXIII Peace Memorial and was nominated for the Nobel Peace Prize in 1976 but will win that of 1980. Despite his constant harassments and arrest, Adolfo Pérez Esquivel never backed out as he continued to the environmentalism, indigenous people of Argentina and also stood against policies like the Free Trade Area of America. Adolfo Pérez Esquivel was appointed as president of the Honorary Council of Service, Latin American Peace, and Justice Foundation and the International League for Human Rights and Liberation of Peoples, Milan and also became a member of the Permanent People’s Tribunal.

Adolfo Pérez Esquivel was married to a pianist and composer, Amanda Perez in 1956. The couple had three children.

In 1995 Adolfo Pérez Esquivel published the book Caminando Junto al Pueblo " Walking Together with the People," which talks about his experiences he had with nonviolence activism in Latin America.