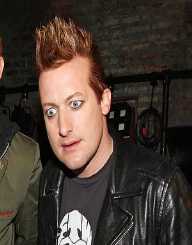 Tré Cool is an American musician who is best known as the drummer with a rock group, Green Day.

Cool was born as Frank Edwin Wright in Frankfurt, Germany on 9 December 1972. His parents were Frank and Linda Wright. Frank Wright was a military helicopter pilot. Cool grew up in Willits, California.

Cool began drumming for the punk band, The Lookouts, at the age of twelve. The Lookouts’ lead singer was Larry Livermore who was a neighbor of Cool’s. It was at this time that Cool adopted the name Tré Cool. While still in high school Cool joined Green Day after John Kiffmeyer left the band. Cool dropped out of high school to focus on his music. Cool had to adapt his style of drumming to fit Green Day’s style. Cool reduced the amount of equipment he used to produce a more pure punk sound. Green Day had already enjoyed some underground success before Cool’s arrival, and they toured extensively. Their breakthrough commercially came with the 1994 album, Dookie. The band received large amounts of airtime on MTV, and the album featured the hit singles, Basket Case and When I Come Around.

The album won the 1995 Grammy Award for Best Alternative album. The band would not match the success of Dookie for nearly a decade. Other albums Insomniac, Nimrod, and Warning, although they sold well, failed to achieve the mainstream popularity of Dookie. 2004 saw the band once again achieve widespread success. The album American Idiot and its title track bought enjoyed massive commercial and chart success. The album featured other successful singles like Holiday, Boulevard of Broken Dreams and Wake Me Up When September Ends. The bands next album, 21st Century Breakdown, topped the charts in fourteen countries. Cool has predominantly played drums with Green Day but has also provided vocals and played guitar on some tracks. Cool has also performed with the other Green Day members under the name Foxboro Hot Tubs.

Cool has been nominated for twenty Grammy Awards as part of Green Day. Of the twenty nominations the band won five, 1995 Best Alternative Music Performance (Dookie), Best Rock Album in 2005 and 2010 for American Idiot and 21st Century Breakdown respectively, Boulevard of Broken dreams won the band the Record of the Year in 2006, and their album for the American Idiot musical won Best Musical Theater Album in 2011. Cool was named best Punk Drummer in 2011 by Drum Magazine.

Cool has been married three times. He married Lisea Lyons in 1995, and they divorced in 1996. Cool and Lyons had a daughter, Ramona, together and Lyons gained custody after the divorce. Cool married Claudia Suarez in 2000 and together they had a son, Frankito. The couple divorced in 2003. Cool married for the third time in 2014. His third wife is Sara Rose Lipert. Cool is also the godfather to Green Day frontman Billie Joe Armstrong’s children, Joseph and Jakob.