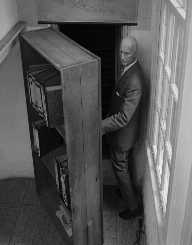 Otto Frank was a German businessman, he is best known as Anne Frank’s father, and it was he who had her diary published.

Otto Frank was born on 12 May 1889 in Frankfurt, Germany. His parents Michael and Alice were wealthy Jews. Frank studied economics and briefly worked in New York. Frank served in the German Army during the First World War. He fought at the Battle of the Somme and the Battle of Cambrai. He reached the rank of lieutenant by the time of the Great War’s end.


Life Between The Wars

After the war, Otto Frank worked in his family bank, but the economic difficulties following the war and the onset of the Great Depression saw the bank collapse in 1930. On 12 May 1925, Frank married his first wife, Edith Hollander. Together they had two daughters, Margot and Anne.

Following the rise of the Nazis in Germany and the wave of anti-Semitism they brought, Frank and his family prepared to flee Germany. The family traveled to Amsterdam via Aachen and Frank began a spice business, Opekta. As the threat of war loomed, Frank attempted to gain American visas for his family but only succeeded in getting one for himself.

Nazi Germany invaded the Netherlands in 1940, and Otto Frank transferred control of his business to gentile friends. Frank again attempted to gain visas to the U.S.A, but the outbreak of war between America and Germany ended any hopes of escape. In 1942 the family was forced into hiding. They lived in hidden rooms above the Opekta store. The family was joined in hiding by Hermann van Pels and Fritz Pfeffer. The family was aided by friends of Frank who ensured the family received food.

In 1944 their hiding place was discovered, and they were arrested. It is not known whether their position was betrayed or their arrest was just the result of a more routine search. As well as those hiding above Opekta, Victor Kugler and Johannes Kleiman, who had helped protect the family were imprisoned in Amsterdam.

The Jewish prisoners were sent Auschwitz. There Frank became separated from his family as he was sent to the men’s barracks in the camp. On 27 January 1945, Otto Frank and the other prisoners at Auschwitz were liberated by the Soviet Red Army. Frank soon learned that his entire family had perished during the war as had von Pels and Pfeffer.

After The Second World War

Otto Frank came into possession of his daughter Anne’s diary after the war. Miep Gies, another friend who had aided the family while they were in hiding, had come into possession of the diary after the family’s arrest. Frank began translating and editing the diary. He wished to use his daughter’s account to shed light on the suffering of the millions who had died and been imprisoned by the Nazi regime. The diary was first published in Dutch in 1947. It was then released in English in 1952.

Otto Frank also formed the Anne Frank Foundation with Johannes Kleiman. The foundation aimed to preserve the building in which the family had hidden. The Dutch government had condemned the building, but Frank was successful in saving it. The building was opened as a museum in 1960 and continues to be a popular attraction in Amsterdam today.

Frank remarried after the war. His second marriage was to Elfriede Geiringer in November 1953. The pair along with Eva, Elfriede’s daughter, moved to Basel in Switzerland, where Frank had the family. On 19 August 1980, Otto Frank died of lung cancer in Switzerland.