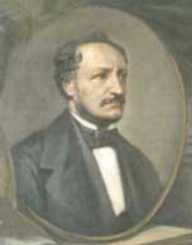 Johannes Peter Müller was born on the 14 July 1801. His family was traditional winegrowers, and they lived a comfortable lifestyle. His father later became a shoemaker and was encouraging his son to become a saddler when he was persuaded to allow the boy to enroll at Bonn University.

Müller studied medicine at Bonn University, graduating with a medical degree in 1822. His doctorate was on animal movement, with particular emphasis on insects. He became interested in Naturphilosophie (a belief in the interconnectedness of nature; as an eternal and unchanging law). Müller studied under Berlin anatomist Karl Asmund Rudolphi (1771-1832) Rudolphi presented him with a Fraunhofer microscope by Rudolphi and Müller used this to carry out a wide range of studies. He passed the Prussian state medical exam and became a microscopist.

In 1824, Müller presented his scientific strategy in a lecture entitled: On the Need of Physiology for a Philosophical Contemplation of Nature. His theory raised controversy as it opposed theorizing and empiricism, instead asking that science be based on close observation, looking for patterns and systems

Müller’s work centered on visual, endocrine, circulatory and reproductive systems. In 1826 the produced On the Comparative Physiology of Vision in Men and Animals where he outlined the workings of human binocular vision alongside information on the eyes of insects. This work won wide acclaim and brought him to international attention. By this stage, Müller was researching various branches of medicine including anatomy, embryology, pathology and physiology

Müller taught medicine at the University of Bonn (1824-1833). During this time he discovered Müller’s Duct. He did a study on the genital glands in embryos, and Müller was also working on a theory relating to color vision to do with nerves in various animals. In 1931, he confirmed the law Of Charles Bell and Francois Magendie, which distinguished between sensory and motor nerves.

Müller’s father died when he was still studying at Bonn University. An academic Philipp Jakob Rehfues saw the young man’s potential and became his mentor and benefactor.

While at Berlin University he started doing comparative anatomy, pathology and continued his research into the physiological aspects of nerves. Müller also studied tumors under the microscope and published his conclusions in 1838. In 1834 he had founded the journal, Müller's Archiv. Müller completed the Handbuch in 1840. After the completion of the Handbuch, he concentrated on comparative zoology and anatomy. He also published on paleontology.

Johannes Peter Müller was employed as a lecturer (1824), promoted to Professor Extraordinarius (1826) and then Professor Ordinarius (1830). He conducted extensive research into the nervous system, anatomy, and pathology. He was rector at Berlin University (1838-1839) and (1847-1848).

Müller married Nanny Zeiller in 1827. The couple had two children, a son, and a daughter.

Johannes Peter Müller suffered from chronic depression and anxiety and had his first nervous breakdown in 1827. He had a recurrence in 1840. In 1848, Müller had the more serious analysis and left Berlin, returning in 1849. Shortly before his death in 1858 Müller was feeling highly anxious, and when he was found dead at home, it was believed by close associates that he had taken his own life.