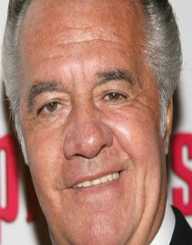 Tony Sirico is an American based actor famously known for his role as Pauli Gualtieri in the film ‘The Sopranos.’ Born July 29, 1942, in New York City, Sirico rose to fame as one of the best actors in American history. He has acted many legendary roles in other films as well including ‘Celebrity’ and ‘Mighty Aphrodite.’ He has been active as an actor since 1974 to date.

Tony Sirico was born Genaro Anthony Sirico Jr. on July 29, 1942, in New York City, the U.S. He grew up in a somewhat compromised neighborhood where crimes of every kind were the order of the day. He joined a gang of his other peers, and at one point in his life, he was shot by another thug from their Irish rivals.

Tony Sirico has been convicted a couple of times having also been apprehended about 28 times. He was arrested in 1967 and served 13 months in prison. He was also arrested in 1971 for possessions of weapons and served 20 months in jail although it was a four year term sentence.

Tony Sirico turned to act and his first ever role was when he featured in the film the 1974 ‘Crazy Joe.’ In several films, Tony took up the role of a gangster which includes ‘Love and Money’, ‘Mob Queen’, ‘Goodfellas’, ‘Mighty Aphrodite’,  ‘Innocent Blood’, ‘Turn of Faith’, ‘Hello Again’, ‘Cop Land’, ‘Mickey Blue Eyes’ and ‘Bullet Over Broadway’. In other films, he featured as a policeman like in ‘Dead Presidents’ and ‘Deconstructing Harry.’

However, in all the films Tony featured, ‘The Sopranos’ was the one that earned him acclaimed fame. Acting as Paulie Gualtieri, he became one of America’s finest in both films and TV shows. Some of the TV shows he has acted in include, ‘Kojak’ (1977), ‘Police Squad’ (1982), ‘The Fairly OddParents’ (2005) and several others. He featured in several documentaries including ‘The Big Bang’ directed by James Toback in 1989.

Sirico took part as a background actor in ‘Family Guy’ doing the voice character of the family’s pet dog Vinny Griffin in 2013. He succeeded Brian Griffin immediately after his death.

Tony Sirico lives a humble and decent life in New York City delving in film production and acting. He has a brother Robert Sirico who is also a co-founder of the Acton Institute which is a free market. Tony Sirico is currently aged seventy six.