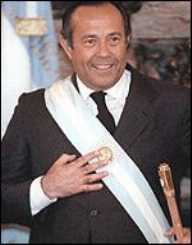 Adolfo Rodriguez Saa was born on July 25, 1947, in San Luis Province, Argentina. His family was well known and prominent in the province, with roots traced back to the 19th century. One of his descendants was the federal caudillo Juan Saa, who fought in the Argentine Civil War.

Saa attended the Juan Pascual Pringles school and later went on to study at the University of Buenos Aires. He graduated in 1971 with a degree in law. Saa graduated in 1971 with a law degree. After finishing university, he worked two years as a teacher at his former school. During this time he also began working as the editor of the anti-Peronist pamphlet The voice of San Luis. He worked as the representative of Peronist Youth in San Louis.

The Peronist party formed in 1955, and in 1973 ran for its first elections. The party won, and Hector Campora became the president. Saa was elected as the provincial legislator and was the leader of Peronist deputies in the chamber. He supported the right-wing Peronists and opposed governor Elias Adre of the left-wing. In 1976, after the Argentine coup d’etat, he left politics.

Saa returned to the political scenery in 1983, when Raul Alfonsin won the elections. He became the governor of San Luis. In his position as the governor, Saa attracted a lot of investments which helped to grow the local industries, social services, public sector and increased tourism. During his time, the levels of employment, industrial production, and scholastic achievement were higher than in the whole country.

In 1989, Saa ran for the primary elections of the Justicialist Party. Carlos Menem won the presidency, but Saa was elected to the Constituent Assembly. He drafted the 1994 Amendment to the Argentine Constitution. He also attempted to run for the presidency in 1995 and 1999 elections but resigned both of his candidacies.

In December 2001, major riots broke out in Argentina, and president Fernando de la Rua resigned from his position. Since the vice president had also previously resigned, the Congress called for an assembly to designate a new president. After the assembly, Saa became the new president and took office on December 23, 2001. As the interim president, he was supposed to call for elections in March.

During his short term as the president, Saa created a new currency- the Argentino. When he announced his cabinet, which included Carlos Grosso, the civil unrests resurfaced. Grosso was a very unpopular figure in the country. Saa declared a sovereign default on the national debt, making it the highest sovereign default in history.

Eduardo Duhalde was elected as the new president, and in 2003, after his term ended, Saa ran for the position. He came in only fourth in the election, and Nestor Kirchner became the president. Saa’s brother became the governor of San Luis. In 2005, Saa was elected the Senator from San Luis and got reelected in 2011.

In 1993, while Adolfo Rodriguez Saa was still the governor of San Luis, he was kidnapped. The kidnappers forced him to perform for a pornographic video and forced to pay a 3 million dollar ransom. The video was never made public. His kidnappers were caught and sentenced in 1995.

Since his loss in the 2003 elections, Saa has worked as a cattle rancher.