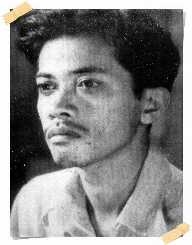 Chairil Anwar was born on July 26, 1922, in Medan, North Sumatra. He was very spoiled by his parents, and as a child was not willing to lose at anything. He attended local schools in Medan but dropped out before 18 years of age. He developed an interest in arts at a young age and began writing poetry. When he was 15 years old, he decided to become an artist.

Anwar’s parents’ divorced and he and his mother moved to Batavia. He intended to finish schooling, but in the end, dropped out of the studies. Anwar became friends with several rich children and became involved in the local literary scene.

In 1942, Chairil Anwar wrote the poem Nisan (Grave), which was inspired by his grandmother’s death, he began to gain recognition. However, his poems continued to be rejected by publishers for not being in line with the spirit of the Greater East Asia Co-Prosperity Sphere. His poem Diponegoro was able to pass the censorship. Anwar became a leader amongst the writers and literary activists and established the magazine GemaGelanggang.

In 1949, Anwar published his last poem Fir Trees Are Sown Off Into the Distance. He died on April 28, 1949. The cause of his death remains uncertain, but it was suggested that he might have had typhus, syphilis or tuberculosis. He wrote about 94 works, 71 of them-poems. Most of his works were published after his death.

In his poems, Anwar reflected on the state of mind at the time of writing. His poems are filled with intensity and reflection of his radicalism. Fear of death and depression is often seen in his works.

In his poetry, Anwar unusually used everyday language. To make the language more dynamic and stronger, he often uses prefixes and suffixes. He was also influenced by the Western culture, which is mostly seen in the 1945 Generation. His poems have been translated into English, French and Dutch languages.