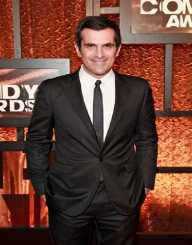 Ty Burrell was born on August 22nd, in1967. His place of birth was in Grants Pass, Oregon in the United States. He is a famous American actor mainly for his portrayal in the TV comedy series, Modern Family. His interest in acting came at a time when he was still a college student. Some of his early contributions to the movie industry are films such as Black Hawk Down- 2001, Evolution- 2001, Dawn of the Dead- 2004 and In Good Company- 2004. Back to You was also another TV show that earned Burrell nationwide recognition in spite of the fact that it was aired for a short period. Burrell is an Emmy award winner particularly for the role he played in Modern Family.

Ty Burrell was born on August 22nd, 1967. His father was called Gary Gerald Burrell. He worked as a family therapist. On the other hand, his mother, Sheri Rose worked as a teacher. For his early education, he went to Hidden Valley High School where he was an active member of the school’s football team. After graduating from high school, he went for his university education at Southern Oregon University located in Ashland. In 1993, he successfully graduated with a BA in theatre arts. His interest in the arts field prompted him to go for his masters’ degree at the Penn State University.

After completing his higher education, Ty Burrell migrated to the New York City with the main intention of striving for his acting career. Unfortunately, the road was not smooth for him as he had to indulge in odd jobs just to make a living. Sooner or later, in 2000, he landed on one of the Broadway productions called Macbeth¬. This gave him the opportunity of earning recognition in the film industry. The impact to his acting career was small, but it was a stepping stone to something big. He began landing minor roles in certain movies such as Law and Order and The West Wing. A year later he was featured in a war film called Black Hawk Down. He was playing the role of Timothy A. Wilkinson. He also featured in another 2004 horror film, Dawn of the Dead.

Slowly with time, Burrell earned recognition through the numerous appearances that he made on the films he featured in during the early 21st century. One of the early lead roles that he played was in Fur- 2006. He also played the role of Connor in the high budget film of 2007, National Treasure 2: Book of Secrets. Again in 2008, he played a part in The Incredible Hulk where he also earned a large audience appreciating his exceptional style of acting.

His acting career went a notch higher with the role he played in Modern Family since 2009. Burrell plays the role of Phil Dunphy which earned him recognition for being among the Emmy award nominees. Fortunately, his depiction in the TV series helped him win the award two times, one in 2011 and the other in 2014. This was the turning point of his career. After his portrayal, he landed important roles in upcoming films such as Butter-2011, Mr. Peabody & Sherman- 2014, voicing of Finding Dory- 2016 and Storks- 2016.

Ty Burrell has been faithful to his wife Holly Burrell since they got married in 2011. The two are proud parents of two children. Burrell also has a brother named Duncan. They are close friends as they work on writing projects from time to time.