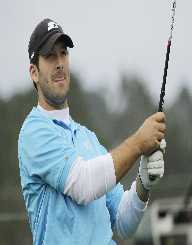 Tony Romo was born on April 21st, 1980. He is a famous American athlete who majorly played in the NFL as a quarterback. In his entire professional footballing career, Romo played for the Dallas Cowboys in the National Football League. While in college, he used to play for the Eastern Illinois University. It is while at the university that he bagged home the Walter Payton Award in 2002. Interestingly, Romo joined to play for the Dallas Cowboys for free. Later in 2006, he played the starting role as a quarterback. It was after this that his skill was recognized and highly appreciated in the entire NFL league.

Antonio Ramiro Romo was born on April 21st, 1980. His place of birth was in San Diego, California. He was born to Ramiro Romo Jr. and Joan Romo. His father served in the U.S. Navy while his mother worked as a store clerk.
In his tender years, Romo showed a strong liking to baseball. His young talent in the game was quickly spotted and was chosen to play in the Little League All-Star team. Playing football only began after enrolling at Burlington High School. He took the position of a quarterback during the first season in 1996. In the following season, his team completed the season with 3 – 6 record. Regardless, it was an improvement to Romo’s career as he was bestowed with some honors. Other games that he showed interest in were basketball, tennis, and golf.

In the NFL draft that occurred in 2003, Tony Romo failed to be listed in any of them. However, he did not lose hope in taking his football career to professional heights. He had high hopes as Sean Payton had assured him that the Cowboys were interested in him. Mike Shanahan, the former head coach for Denver Broncos also showed high interest in young Romo. Moments later, Romo was signed to the Cowboys as a free agent. He was drafted as a third option during his entry to the team. Chad Hutchinson and Quincy Carter were among the first team options in his position as a quarterback.

Later on, another signing was made and Vinny Testaverde, a veteran quarterback, joined the team as a replacement for Chad Hutchinson. He, however, left the team in 2005. During the same year, Romo managed to cement his position as the number 2 quarterback for the team. He performed well during the 2005 – 2006 season.

After landing himself as the number 1 quarterback for the Cowboys, Tony Romo exploited the opportunity to offer the best for his team. His style of play was different and entertaining. This is what brought a huge fan base to his side. Romo’s efforts during the 2006 season pushed his team to the playoffs. His team however lost in the NFL Wild Card round. Sadly, this was caused by him after holding the ball during a goal attempt. Regardless, Romo was listed among the Pro Bowl contenders.

The following season, Romo was set to prove that his earlier season was not by luck. He made a franchise-record of 36 touchdowns. He helped his team to end the season with 13 – 3 record. As a result, Romo found himself among the Pro Bowl contenders for the second time in a row. Unfortunately, his play in big games was questionable after his team lost to their rivals New York Giants during the playoffs.

Tony Romo was romantically involved with Jessica Simpson in November 2007. The two broke up in 2009. In 2011, Romo wedded Candice Crawford, a beauty queen. They welcomed their firstborn son named Hawkins in 2012. Two years later, they had their second born child. They named him Rivers. Jones Mccoy, their third born was born in 2017.