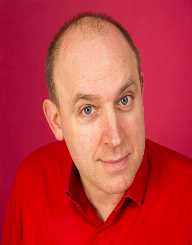 Tim Vine was born on March 4, 1967, in Cheam, Sutton, England. His parents are Diana Tillett and Guy Vine. He has two siblings, Sonya and Jeremy. His brother also works in television.

As a young adult, Tim Vine loved to tell jokes, play music, and to generally have a great time with his friends. All in all, it could be said that he was a pretty average teenager, but since a sense of humor, that was greater than his peers. As a young adult, he went on to attend Epsom College.

It was not until the 1990’s, when Tim Vine was around 30 years old that he went into acting. Up until then, he did not have any careers of special interest. He mostly worked on comedy shorts, and he did some stand-up comedy. However, he was not very famous at this time. He started to gain a small amount of fame in the late 1990’s when he hosted the show Whittle in 1997. He kept this job until the show’s end in 1999.

The early 2000’s were Vine’s time to shine. In 2001, he started acting on the show, The Sketch Show. He acted in various comedy skits on this show from 2001 to 2004. From 2003 throughout most of the 2000’s, he appeared as a celebrity guest on several television shows, including both sitcoms and game shows. These shows include the following: Dating Ray Fenwick, Library Altitude Zero, Stewart Lee’s Comedy Vehicle, and Clatterford.

In 2006, Tim Vine earned his first major recurring role on the television on the show Not Going Out. He played a character named Tim. He acted in over 30 episodes of the show from 2006 to 2014. He also acted in his first made for television movie in 2011, called Comic Relief: Uptown Downstairs Abbey. In 2014, he landed a recurring role on another television series, Blandings. Tim Vine played a character named Beach for seven episodes. His most recent time on camera was in 2016 when he appeared in the Tie Timinee Tim Timinee Tim Tim To You video.

He has also made several DVD’s, mostly stand-up comedy videos, some of which are listed below.

Tim Vine has written two comedy joke books and has contributed to one other. He first contributed to a book in 2003, which was called Sit-Down Comedy: Stand-Up Swap the Stage for the Page. The book was edited by Malcolm Hardee and John Fleming. Other jokesters who contributed to the book were Stephen Frost, Hattie Hayridge, Linda Smith, and John Dowie.

During his long comedy career, Tim Vine has won two awards and has broken a world record. These awards are listed below.

Tim Vine won the Guinness World Record for most jokes told in an hour in 2004, making the new record to beat 499 jokes. He later lost the record for years later when comedian Taylor Goodwin told 550 jokes in one hour.