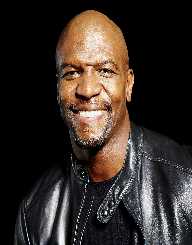 Terry Alan Crews was born 30th July 1968, to Terry and Patricia Crews. He was born in Flint, Michigan, United States, and was raised mostly by his mother, due to his father being an alcoholic with abusive tendencies. Despite this, Crews came from a strict Christian background.

Terry Crews graduated from high school at the Flint Southwestern Academy. He received an art scholarship, sponsored by Chrysler, which saw him attend the Interlochen Center for the Arts in Michigan. Afterward, he studied at Western Michigan University (WMU), having been granted an Art Excellence Scholarship, along with an athletic scholarship for football.

Terry Crews played for the WMU Broncos in defense, and was awarded All-Conference honors and won the title, 1998 Mid-American Conference Championship.

In 1991, Terry Crews was drafted by the Los Angeles Rams. He also went on to play for the San Diego Chargers, the Washington Redskins, and the Philadelphia Eagles. He retired from the NFL in 1997.

He moved to Los Angeles to pursue an acting career, which was something he had always wanted to do. Terry Crews acting debut came in 1999 when he took on the role of T-Money in a game show called Battle Dome. Crews was with the show for two seasons until it was canceled in 2001.

After the cancellation of Battle Dome, Crews continued to audition but didn’t gain success until his role in Friday After Next, with Ice Cube.

Terry Crews then appeared in White Chicks (2004), and in 2005, Adam Sandler gave Crews a part in his movie, The Longest Yard.

Terry Crews was then awarded a role in the television sitcom, Everybody Hates Chris, and it was this role that grew his public popularity. The show ran from 2005 to 2009, but it was a stepping stone for Crews who remained in regular work.

In 2010, Terry Crews took on a role in another television sitcom, called, Are We There Yet?. The show aired for three seasons and finished in 2013.

Terry Crews then joined the cast of Brooklyn Nine-Nine, a television series on Fox, which began in 2013 and was renewed for its fifth season in 2017.

Throughout his career, Terry Crews has mostly acted in comedy roles, but he has also acted in action roles, including The Expendables.

Terry Crews has also done voice-overs for animations, has hosted Who Wants to Be a Millionaire, and for two seasons over 2010 and 2011; he was in a reality television show about his own family, which was called The Family Crews.

Surprisingly to some, Terry Crews is an excellent sketch artist. Over the years, Terry Crews has supplemented his income by accepting commissions to draw, and his work included a series of lithographs licensed by the NFL during his playing career.

Terry Crews released his autobiography, Manhood: How to Be a Better Man or Just Live with One, in 2014.

In his autobiography, Terry Crews addressed his long-term addiction to pornography. He beat his addiction by getting treatment in a rehabilitation facility and now speaks out on the subject in the hope of helping others.

Terry Crews married Rebecca King, a gospel singer, in 1990. The couple has four children, three daughters, and a son.